From a very early age I have been fascinated by science in general, and by the theory of evolution in particular. My youthful thirst for knowledge, which in my case started in early childhood, was nourished by the Darwinian vision – the idea that innumerable tiny events, accumulating over aeons of time and combining in ever more elaborate ways, could result in the immense complexity of the living world. Even today, I derive real intellectual pleasure from reading good books on the subject. They present persuasive arguments and provide an account of the history and diversity of life which I still find exciting and even inspiring. 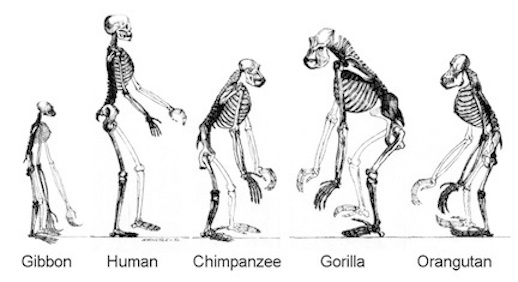 But there is another side to this story. Almost as early in my formative years, a part of me became subconsciously uneasy with book learning. I did not realise this was happening until much later, but I can see now that this was a hazy feeling – very confused at the time – that my deepest yearning for knowledge, for understanding, could not be satisfied with a kind of learning which involved my intellect alone. It demanded something else, something more whole.

This strange feeling, together with the influence of people close to me – especially my father – eventually led me to seek understanding through an inner spiritual search.

It is when I try to reconcile the scientific account of life’s history with the experiences which this inner search has brought me, that I encounter a deep contradiction. A modern neuroscientist would no doubt assert that the inner experiences which come from an inner search are – like every other aspect of my psychological life – functions of my brain architecture, the result of complex interactions between neurons in my brain and nervous system. An evolutionary biologist might add that these patterns of interaction are either an “adaptation” (that is, an inherited trait which has been shaped by natural selection over past generations) or a by-product of some other adaptive features of my brain.

In other words, modern science implies that I am mistaken in ascribing such significance as I do to the impressions of myself which an inner search brings. If these experiences result from an adaptation, then it means that they serve some practical function in keeping me – or my Stone Age ancestors – alive, by unconsciously modifying my behaviour, but in ways unrelated to my “conscious” experience. If they are a by-product of some other adaptation, then they have no objective significance at all. In either case, the significance I “consciously” ascribe to these experiences is beside the point. Just as some people like to indulge in too much fatty food or in casual sex or in solving crossword puzzles – each of which can be more or less plausibly explained in terms of adaptive behaviours – so some of us, it appears, “like” to experience a level of inner connectedness; it is just another “appetite”.

The problem with this perspective must be immediately evident to anyone who has sincerely tried to pursue a path of inner search. They will recognise that the experiences such an endeavour brings are on a completely different level to the other examples I cited. Once experienced, this difference in levels is unmistakeable.

Popularisers of evolutionary theory, particularly of evolutionary psychology, are used to dealing with objections which superficially resemble this. A cultured and sensitive person, for instance, may not like being told that his love of art is no more exalted than his fear of snakes or his sexual urges, but an evolutionist would argue that he is being deceived by his own preferences. Modern evolutionary theory has a battery of ingenious arguments by which the half-stated assumptions we have inherited about the different levels or qualities of human experience can easily be disposed of. Real inner exploration, however, brings a completely new understanding of this question of levels.

This new understanding is something which grows with experience – it “evolves”, in fact – and my own understanding is still very callow, but the best way I can think to put it is like this: the higher can know the lower, but not vice-versa. My “appetites” are indeed very diverse – some have the character of an intellectual interest, others are more emotional in nature, others more physical – but what they strikingly share in common is their mutual incomprehensibility. They have no understanding of, or interest in, each other, and when their paths cross they interact blindly and uncomprehendingly. But the characteristic of a higher level is that, when I am in touch with it, all of these impulses can be seen. This seeing encompasses them all, as part of a greater whole.

The need for this seeing, which also manifests as a need for unity, is also something which grows over time. As it grows in me, it gradually illuminates more and more aspects of my daily life, leading me to question ever more deeply myself and my place in the world. But is this need “necessary”? Does it contribute to my successful functioning as a biological entity, in the Darwinian sense? I do not believe so. I cannot see how an evolutionary explanation, however ingenious, could ever account for this inner need.

Here is the nub of my difficulty with the modern scientific account of life, for all its intellectual appeal. I am aware that it is not a scientific objection; it fails Popper’s famous “falsifiability” test and is based ultimately, not on a set of propositions that can be rationally debated, but on a conviction, a feeling. It is a conviction, however, which is the fruit of my inner striving, and therefore carries as much weight with me as the most persuasive of intellectual arguments. I am therefore in the privileged position of being presented with a paradox which most people would not see as a paradox at all. I suspect that most people would choose either to throw in their lot with the scientists and reject all this spiritual mumbo-jumbo, or to revert to traditional English anti-intellectualism and reject the science.

Personally, I would rather stay with the paradox. I have no idea how it could be resolved, but that does not trouble me – quite the contrary, in fact. Surely unresolved paradoxes should be meat and drink to a seeker after truth?

When I was very young – five or six, I think – my mother bought me a book on biology, evidently aimed at much older children. It had a preface by an eminent biologist, I forget who. This preface concluded with a sentence which made a tremendous impression on me. “Remember,” it said, “it’s questions that make a scientist, not answers.”