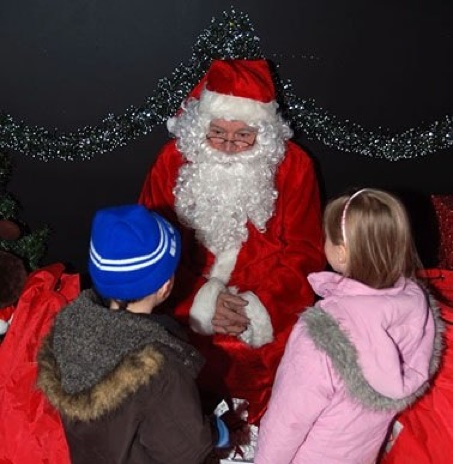 In my opinion, every child ought to have one really magical experience of meeting Father Christmas. Not a present-burdened diversion in a big department store, not a modern arrival by helicopter (newspaper men clicking in the background). No, a real chance to meet the Spirit of Christmas. Something special to remember.

Why on earth do I believe this? I harbour grave doubts about this whole Father Christmas thing. I remember feeling quite uncomfortable foisting the whole delusion onto my children; it didn’t seem right to deceive them so blatantly. Why do we conspire to hoodwink our children into believing that there really is a being who can travel the whole earth in one night delivering presents? In one night! William wasn’t very old before he began to question that one. We had an earnest, and rather surreal, discussion about the practicalities, which I followed through, thinking that at least I was encouraging him to think!

I never had a really magical experience of meeting Father Christmas when I was a child, perhaps that’s why I wanted to provide such an experience for my children. One December, when William was three and Daniel was a baby, I took them to one of those farms that cater for children with small animals and large play areas, specifically to see Father Christmas. Things began well (once I’d handed over the money – let’s gloss over that bit). An elf asked us to wait for the next tractor ride to Father Christmas’s house. Now Father Christmas’s house was clearly visible, barely a stone’s throw away, as a Dutch barn full of straw bales covered in Christmas decorations, so the elf had to be esspecially believable, and she was. She was serious and rather excited about her special responsibility. Her apparent belief began to affect us all.

We waited patiently and even with anticipation. Finally, the tractor arrived and we climbed into the trailer, and though the journey was necessarily short, even allowing for some meanderings, when we got down from the tractor, I had a definite sense of having arrived Somewhere Else. We were conducted with great ceremony down a dark passage and then had to wait until the Great Man was ready to see us, and if I knew with part of myself that this was just to allow time for the previous group to leave, somehow, it didn’t feel as if that was why we were waiting.

So we went in to a small, dimly lit study. That’s how it appeared, complete with fireplace and armchair, on which sat Father Christmas. When he first spoke, I was disappointed; he was so young, probably in his 20s – an out-of-work actor, my mind quickly suggested. But I soon forgot that, because this was Father Christmas. He just was. I can’t remember what he said exactly; isn’t that what people always say, after meeting famous people? I think he talked about making presents and about Greenland and how cold it was, and then he said that he was tired and he’d just give us all a present and then he would have a nap. The old gentleman really did seem to be getting tired, so we took our presents and thanked him and left. Coming out, blinking into the daylight, I had that feeling you have after a moving experience, a feeling of release, and of somehow having been blessed.

So why and how did this happen to me, even when I ‘know’ that Father Christmas does not exist? Maybe there is a clue here as to why we adults continue to conspire to delude out children. In some part of us, we are still children, still wanting to believe in something. . . . but believe in what? Could this be an echo of a deeper yearning in some part of us which senses our incompleteness and longs for something more real? And perhaps that early disillusion, that moment when we are finally forced to admit that Father Christmas isn’t real, is a helpful pointer to something the adults around us can’t quite tell us; something about not taking things too literally perhaps?

That was quite a few years ago. And I still feel a warm glow when I remember that visit. The other day, I asked William about it; he doesn’t remember it at all.