It’s role in a healthy diet? 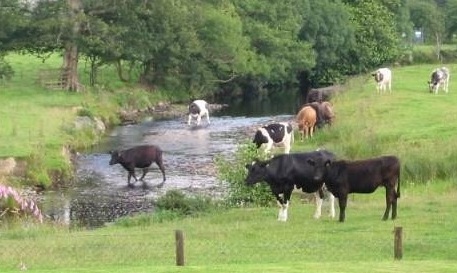 Cows give milk; they do not give semi-skimmed milk. With industrialisation and the growth of cities, there was an ever-growing population who had to buy all their food. Specialised dairy farms developed on the outskirts of cities, and delivered milk and dairy products locally, until the development of milk pasteurisation and transport systems about 150 years ago meant that milk would keep for several days and could be sent much further. The composition of the milk varied with the season, as it always had done.

Until well into the twentieth century, if a farmer used his milk to make milk products, the milk would be kept until it just was beginning to turn sour. At that point, the cream can best be separated- by skimming- churned into “sour cream butter”, and left for ten days to develop its best flavour. What remained was very slightly sour skimmed milk- buttermilk. It could be drunk, and some could be used in bread-making. Alternatively, instead of skimming, the souring process could be allowed to continue, the milk would curdle, and later the curds and whey would be separated, the curds matured into cheese, and the whey fed to pigs. 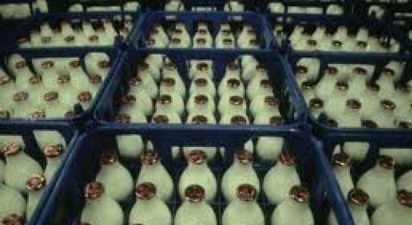 Nowadays, large dairy farms send their milk to a factory, where, after pasteurisation, the milk is centrifuged, which is the most efficient way of separating the cream. Some of the cream is turned into “sweet-cream” butter, and the rest of the cream and the skimmed milk are processed to make milk of a constant composition, either full fat milk (usually 3.0% fat), or, the new product, semi-skimmed milk (usually 1.6% fat). All this is done under strictly hygienic, that is, sterile conditions. Cows are routinely treated with antibiotics to control mastitis, because cows bred to produce very large volumes of milk from highly fertilised grass and concentrated feeds are susceptible to that disease. As a result of the sterile conditions and the antibiotics, the milk does not go sour- it “goes bad”. Therefore, the liquid remaining after butter has been made is not sour either, and natural buttermilk is no longer available, only “cultured buttermilk”. Similarly, one can no longer get sour cream, only “soured cream”.

A statement like “40% of our diet is fat” does not mean 40% by quantity- it refers to the energy (calorie) content. A typical “western” diet does contain about 40% fat in that sense, whereas the poor in a developing country may only get 20% or less of their energy from fat; therefore, they have to eat large quantities of starchy foods (bread, rice, maize etc) to get the energy they need. Most of the fats we eat are used as an energy source, but there are some which are “essential”, that is, our bodies need them but cannot make them, so we must have them in our diet.

Are high-fat diets unhealthy? Inuit Indians (Eskimos) eat a 70% fat diet, and have much less heart disease and cancer than westerners. There is no correlation between the amount of fat in the diet and health or longevity when making a direct comparison between people of comparable age, sex, genetic background and lifestyle. The fact that the incidence of heart disease and certain cancers is much higher amongst westerners- even allowing for our greater longevity- than in developing countries is undoubtedly partly due to our sedentary lifestyle- we need to eat less- and to other dietary differences, such as the relatively low level of dietary fibre and fresh vegetables in our diet, and the kind of fat we eat.

An unhealthy diet is one which contains more energy than we need, and in which the content of saturated fats and trans-fats (both of which raise blood cholesterol levels) is high compared to that of essential fats. The principal sources of saturated and trans-fats in western diets are margarines, and the shortenings (industrialised fat products) used by the food industry in the thousand of ready-prepared foods now available, and for frying. These margarines and shortenings are made from vegetable oils and fish oils by “saturation” (turning liquids oils into low-melting solids by artificial hydrogenation).

In the fats we eat, there needs to be a balance between saturated fat (useful for energy) and essential fats, which are polyunsaturated. These are of two kinds, called omega-6 (plentiful in eg sunflower oil) and omega-3. For the latter, there is not a rich source in our usual diet, but the best sources are oily fish (herring, mackerel etc) and lamb and beef from grass-fed animals. The plant sources are not as good because the omega-3s they contain are not actually the ones we need, and have to be altered in our bodies first- which happens to be an inefficient process. The plant omega-3 fats occur in small amounts in grass; there are more in flax and rapeseed oils. Milk from grass-fed cows will contain small amounts of essential fats, which will also be present in butter and cheese, but dairy products contain far larger amounts of saturated fat.

This seems to be widely believed, but it is not so. The question needs to be seen in perspective. About half of the fat in our diet comes from vegetable oils. This may seem surprising, until one realises that only a small proportion of that is consumed as vegetable oil – it is mostly consumed in the form of margarine and the hydrogenated (more or less saturated) fats used by the food industry. The second most important source of fats for us are dairy products, and a study showed that, as the consumption of semi-skimmed milk rose (at the expense of full-fat milk), so did the consumption of cream and of cheese, with the result that the total fat intake from dairy products has remained almost unchanged.

For anyone consuming modest amounts of milk and aiming to reduce the amount of fat they eat, changing from full-fat to semi-skimmed milk will hardly change their fat intake. Reducing the consumption of ready-prepared foods, especially “fast foods” such as hamburgers, pizzas, ready-prepared meals, fish-and-chips etc,and processed foods like margarine, would have a much bigger impact on the intake of saturated fat. It may be beneficial to increase the consumption of foods containing polyunsaturated fats- in moderation.