In 1989 Queen Elizabeth invited Monty Roberts, an American horse whisperer, over to England. Though some controversy has accompanied his claims, his skills and methods have been watched by millions of people, and have attracted the interest from a number of top British race horse trainers.

The traditional method of training a wild horse is fittingly referred to as “breaking”. Initially a newly captured horse would be tied up, with a rope around its neck attached to a strong post. It would fight this restraint for all it was worth until eventually it gave up, exhausted.

Then it would be hobbled and a bundle of sacking flapped against its body until it was accustomed to it. A girth or type of saddle was next fastened around it, again in a hobbled condition, and it would be encouraged to buck and try to loosen the girth, to no avail.

A process called “mouthing” followed, in which a bit was inserted in the horse’s mouth, with reins tied back to the girth or saddle. The animal would be left to fight against this until its mouth was rubbed raw. Similarly negative methods would continue to be applied until the horse was “broken in”, or tamed, and could be ridden. This process was seen by many as the breaking of the horse’s independent spirit.

Monty Roberts proposed a persistently different approach to the domestication of horses: “The evolution of the horse suggests that they will respond better to control based on non-violent leadership and instruction. In the wild this tends to come from signs and signals from other horses. In the domestic situation we want horses to respond to us. For really effective training, we need to be aware of the natural signals which we can communicate to the horse like beware, relax, stop and move on. The horse must also be taught many new responses.”

How did he arrive at this approach? Roberts describes in his books and website how he was sent to Nevada at the age of 13 in order to round up wild horses for the Salinas Rodeo Association’s Wild Horse Race, and there began observing the interactions between mustangs. He realized that they used a discernible, effective and predictable body language to communicate, set boundaries, show fear and express annoyance, relaxation or affection, and he came to understand that if humans could make use of this silent language then training could be much more effective and humane, promoting a true partnership between horses and men.

This may seem completely obvious to us, sitting in front of our computers and as far away from a wild mustang as possible, but it had not penetrated the traditional ranks of the equine fraternity to any appreciable extent before. So if I describe my first encounter with his approach, this will demonstrate one of his methods, and how he “spoke” this language.

My first teenage encounter with horses began by being dragged along the cinder ground on my back with one foot locked in a stirrup. My second was to be riding a pony and sent into a field where a horse was grazing with its foal. The mare charged us, eyes blazing, teeth bared. My mount bolted. Farm hands yelled advice from the fences. Interestingly I rode this first enforced gallop like a professional. How? Don’t ask me. I rode a number of times as a middle aged man and never had a good “seat”, although I always managed to stay aboard, whatever happened.

We drove out of London and after a time reached the horsewoman’s rural dwelling. She greeted us with a fey kind of manner – in the sense of a person who knows and sees things which are not customarily known or seen. With few words she led us into a large barn containing riding equipment, trailers, and other farmyard stuff. Nearby were stabled a number of horses, including some racing thoroughbreds. She took from this array a longe or lunge line. This is a rope which can be from 20 to 60 feet long. It is traditionally used to train horses from a distance as they travel in a circle. We were not about to use it for that purpose exactly.

The horsewoman brought out a horse from its stable, and led us all along a track to a corral which was about 30 yards wide. It was surrounded by a solid wooden wall, and outside the wall was a narrow platform where you could stand and watch what was happening on the inside. She led the horse into the enclosure and my wife and I stood on the platform and watched.

She took the looped lunge line in her hands, stood back from the horse, and made a kind of “you-go -away-from-me” gesture with hands and body. The horse began to back away and when the distance between her and the horse was right she spun out the lunge line towards the horse, not hitting it. 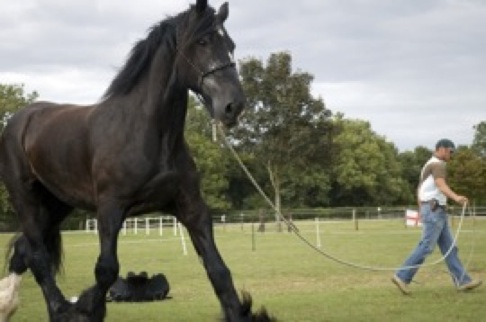 The lunge line move was a kind of extension of her “go-away” gesture and sure enough the horse backed and walked until it reached the perimeter. Then she lunged at it several times and it began to trot round the perimeter, feeling, it seemed, “I don’t like it but I know when I’m not wanted.” After a few circuits she pulled the line towards her and turned her back on the horse. This is an important gesture, giving the horse your back, as if you are saying “I reject you, I don’t want you”.

As she walked away the horse began to follow her, wishing to “join up” with her; a phrase which has been adopted to fit this process. Then it was my turn. I joined her in the corral and she explained basically what she had done, and left.

On my own I tentatively began to “drive” the horse away. It reacted in a similar way and moved off. She called to me to use the lunge line vigorously, which I did. The horse moved faster around the corral. Then I turned and walked away. Not believing that the techniques would work for me, a novice, I was surprised to realise that the horse was coming closer and closer to me, unasked. It brought its nose and head between my arm and body.

I must say that the crowning moment of the event was the feeling, the deep and simple feeling, of the horse reaching out to me. It seemed incredible that I was experiencing directly the feelings of a horse, wishing to “join up” with me.

It persisted until she called me out of the corral and my sceptical wife replaced me. Suffice to say that my wife was also truly impressed and admitted that her doubts had been ill-founded. For myself this new feeling, meeting up simply and clearly with the feelings of a big animal like a horse, persisted for some time. I will never forget it. I was deeply touched.

Since that time, some five years ago, the value of befriending and working with horses has been acknowledged more and more widely This is especially true in relation to both grown-ups and children with varying types of mental or physical illness.

According to Emily Kilby in her 1998 Equis Magazine articles “Secrets of the Horse Tamers”, anyone wishing to become a horse tamer, “must have the delicacy of touch and feeling of a woman, the eye of an eagle, the courage of a lion, and the hang-on pluck of a bulldog.” Horses are able to discern problems in human beings and share their own direct feelings with us to help us to reach parts of ourselves which other methods do not reach! 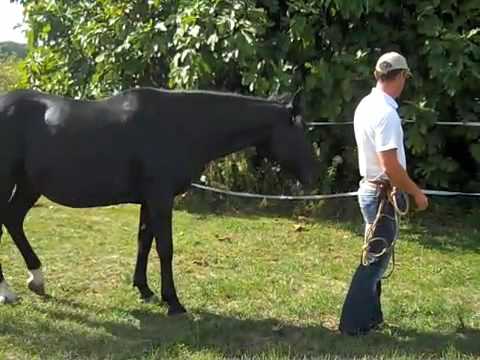