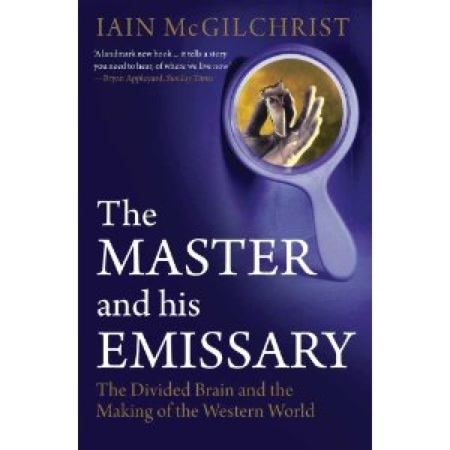 Further Thoughts on The Master and His Emissary

Réné Guénon characterized the modern era as the “reign of quantity”. Iain McGilchrist might reply that it is “the reign of the left hemisphere.” In The Master and His Emissary, he argues that the distinctive characteristics of the modern spirit – its utilitarian, exploitative attitude to nature, its narrow rationality, and its uncomprehending rejection of metaphor and myth – are all expressions of a way of thinking that is dominated by only one half of the brain.

The fact that the human brain is divided into two almost independent halves or “hemispheres,” which are connected only at the base by a narrow band of tissue, has been obvious to students of human anatomy for many centuries. During the nineteenth and twentieth centuries, this gave rise to some simplistic theorizing, which crudely assigned particular functions or roles to the different hemispheres. Some of these ideas were eagerly taken up by journalists, management gurus, and the like, to the chagrin of mainstream neuroscientists, most of whom have become wary of approaching the subject at all.

This wariness is understandable. The more neuroscientists study the brain, the more complex and subtle its workings turn out to be. Just about everything we do, think, or feel involves coordinated activity between many brain regions, so that the idea that specific functions or capabilities, such as language or empathy, can be tidily “mapped” to particular parts of the brain must be profoundly mistaken. Nevertheless, in synthesizing the work of numerous researchers, McGilchrist finds a developing consensus that the differences between the hemispheres are indeed real and significant.

More to the point, he finds that these differences are not concerned with things the brain does, but with different kinds of attention; the two hemispheres are associated with fundamentally different ways of relating to the world. In brief, the left hemisphere brings a narrowly focused, discriminative attention. It views objects in isolation from their context and seeks to categorize and systematize them. The attention of the right hemisphere, by contrast, is broad and flexible. It perceives the world as a connected whole and each entity in it as a unique individual without any categorisation.

McGilchrist illustrates this by the example of a concert pianist. When preparing for a performance, the pianist will analyse a piece of music in great detail, plan closely how each measure is to be phrased, each chord voiced, but when it comes to the actual performance none of that is in his mind; all those detailed preparations have already done their work by enriching his relationship to the piece. His task now is just to play.

The reason the third stage in the relationship is so crucial is that the left hemisphere working alone is woefully limited. On its own, it can understand the world only in its own terms – in terms of systems and categories with no room for context or ambiguity. In other words, it cannot see the wood for the trees. In fact it doesn’t even see the trees; what it sees are not real trees in all their many-sidedness, but just concepts, ideas about trees. Worse still, the left hemisphere does not see this as a deficiency – it cannot appreciate its own limitations.

Thus, using his work on the brain as a platform, McGilchrist is really telling us about two modes of relating to the world. That they seem to emerge from different halves of the brain is almost incidental–it could even turn out to be mistaken, as he cheerfully, if somewhat archly, reminds us at the very end of the book. It is the modes of attending, and the relationship between them, that matter.

It is also in the relationship between the two that danger lies. So profound are the differences in outlook between the hemispheres – or rather between the two modes of relating to the world which they embody – that the left hemisphere is tempted to usurp its subordinate position. Instead of returning its understanding to the right hemisphere, it tries to act alone, interpreting the world solely in its own terms. This leads to a contest in which the centre of gravity, the source of initiative, shifts from one hemisphere to the other. This manifests as struggle between a mindset that values the explicit over the implicit and is suspicious of metaphor and ambiguity, and one that is at home with the implicit and the metaphorical, but is less concerned with rationality or consistency.

This conflict is the real subject of the book. Although McGilchrist devotes six lengthy chapters and a mass of impressive scholarship to the scientific argument I have just summarized, that is only a preamble to what really concerns him, which is the effect of the resulting imbalance on human history and on the future of the modern world.

His ensuing survey of the history of Western consciousness is rich and wide ranging–too wide ranging to be easily summarized. The common thread, however, is the idea that at different periods left- or right-hemisphere modes of attending to the world have come to predominate in the life of Western societies, so that the values of different periods – their intellectual, religious, artistic, and social preoccupations – are to some extent expressions of these different ways of being.

What makes this survey so stimulating is that he combines a necessary degree of intellectual detachment with a sincere respect for the strivings of the poets, philosophers, artists, and musicians whose work he cites. This sincerity communicates itself to the reader and gives life to his ideas.

There are numerous intriguing examples in the second half of the book, but one observation turns out to be particularly significant: an imbalance towards the left-hemisphere can be self-correcting. Eventually the limitations of a left-hemisphere view of the world become so obvious that they lead to a natural re-balancing. McGilchrist sees an example of this in the way that the Romantic Movement, with its interest in myth and folklore and its reverence for nature, grew of out the rationality of the Enlightenment in the late eighteenth century, not as a reaction but as a natural continuation.

What troubles him is that in our own age, this natural rebalancing does not seem to be working. The successes of science, technology, and utilitarian economics have been so stupendous in terms of technical achievement and human welfare that the left-hemisphere attitude is able to shrug off its equally obvious failures – the rape of nature, the loss of reverence for the sacred, the failures of attempts to systematize the foundations of mathematics or to make sense of the mysteries at the heart of quantum mechanics (the theories of particle physics can be verified to mind-boggling numerical precision, but as to what they mean, nobody has a clue). Instead of a corrective re-balancing, the imbalance seems to have become self-reinforcing.

I mentioned Guénon at the beginning and, for all the profound differences in outlook between them, he and McGilchrist both leave me with an impression, a vision, of our world hurtling in a particular direction, towards some kind of limit. This is not to suggest that McGilchrist is morose or pessimistic; on the contrary, his élan and love of life are apparent on every page. Rather, this impression simply emerges from what he has to say, without judgment. Decrying this state of affairs is already an interpretation. Instead, I need to try to relate it to myself. What is life asking of me?

That a book can lead me to question myself is praise indeed – I can think of no higher recommendation. Like any really interesting book, it is to be valued more for this than for any answers it gives. In fact, going over in my mind the wealth of ideas McGilchrist presents, I find that a few of them strike a false note with me, but in a productive way, because they point to a deeper possibility.

One such false note concerns McGilchrist’s characterisation of ancient art, particularly the art of Egypt and pre-classical Greece. He particularly draws our attention to the comparative lack of naturalistic detail and individuality in the representation of the human form, and the intriguing tendency (verified by statistics) for faces to be shown looking to the viewer’s right (the field of view of the left hemisphere), a tendency reversed in the naturalistic art of the classical period and the Renaissance. In all these characteristics, the thrust of his argument leads him to emphasize the similarities with Modernist art. However, I find that the differences – although, ironically, they are much harder to adumbrate in a “left-hemispheric” fashion – are much more profound.

When I look at great examples of ancient art, or of some Medieval religious art, something within me resonates. It seems to me that the artist’s principal concern was with this possibility of resonance, and that his lack of interest with naturalistic representation arose more from this than from a “left-hemisphere” tendency to reduce human individuals to mere categories. I know of no Modernist art that has this quality; some artists may have tried to reproduce it, but, lacking some necessary quality in themselves, were unable.

What is this missing quality? This is not something that The Master and His Emissary addresses at all, yet reading it has helped to reinvigorate the question in me.

This review first appeared in Parabola magazine and is reproduced by kind permission.

An earlier introduction to the same book can be found by clicking here.