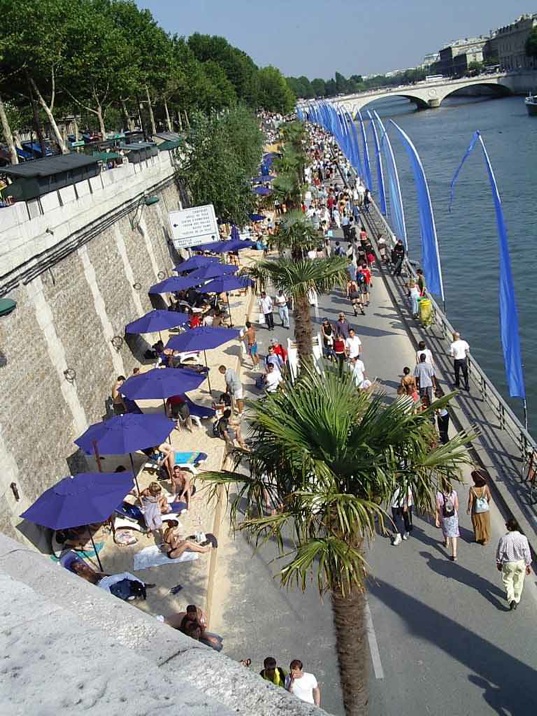 Summer has definitely arrived – even though the weather has been distinctly autumnal. The holiday season starts at the beginning of July, and is really established after the 14th. Paris takes on a very different character during this period, which lasts until the beginning of September, when everything starts up again – a period known as “la rentrée” (a word for which I cannot find an adequate translation). That will be the subject of a future letter. The holiday period affects the whole of France, of course, and it seems as though the whole country comes to a virtual halt for almost two months. (There is a common complaint here that it lasts too long, and is damaging to the economy, despite the fact that statistical evidence demonstrates that the productivity of the French work-force is one of the highest in Europe, even with a high unemployment rate). The effect of this period on Paris, however, is very particular.

The most obvious sign is the number of shops that close for up to a month: bakers, butchers, grocers, but also cafés, restaurants – even pharmacies. Radio schedules are changed, and there a plenty of repeats or special summer programmes. Many Parisians leave the city, and every week-end there are huge traffic jams on motorways. The metro is full of people struggling with heavy suitcases on the way to main-line railway stations. Even parking is free during the month of August – but I don’t know if this will be the case this year.

Not that Paris is empty during this time: France is still the world’s most popular tourist destination, with 82 million visitors in 2007, and a significant proportion of them come to Paris for at least some of their holiday. France is culturally, as well as politically, centralized in Paris, but during the summer it gives way to the provinces. There are important festivals in Avignon (theatre), Montpellier (dance) and Aix-en-Provence (opera), to name but a few. However, there have always been a substantial number of Parisians who enjoy the city in summer, and especially in August. Personally, I enjoy the feeling of being a tourist in the city I live in; I like the different rhythm life takes on; finally I appreciate the contrast when everything starts up again in September.

However, I don’t want to give the impression that nothing happens during this period: there are still plenty of things to do. For the past few years the Paris administration has established “Paris Plages” (to my mind a rather futile operation) which consists in closing a section of the road that goes by the Seine, and putting down sand and deck-chairs to simulate a beach on the côte d’azur. Much to my amazement the idea has proved successful, and has even been exported to other European cities.

More serious initiatives include open-air film projections in the Parc de la Villette. In former years these shows were free, but this year there is a nominal charge of 2€. One can hire a deck chair for 5€. Some programmes include three films and last all night. There are plenty of concerts, either free or at reasonable prices, and other activities such as a circus festival.

Those coming to Paris who would like to know more can consult: http://www.quartierdete.com and http://www.villette.com