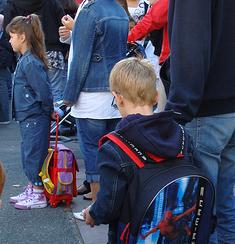 As I mentioned in my last letter, there is a special feel to Paris during the month of August. Many Parisians flee to the coast – or to the mountains: it’s a classic alternative. There are tourists of course, though rather fewer this year it seems to me. Many shops and restaurants are closed, and there is a dusty emptiness about the city – very well captured by Rilke in The Notebooks of Malte Laurids Brigge – which has its own attraction. The differences allow things to be seen.

But suddenly, as the last week of the month is about to begin, there is already a sense of what is about to happen: “la rentrée”. This word is not really translatable. It’s not just that schools are about to start again: it involves almost every aspect of social and cultural life. Of course everything connected with education looms large. Shops are full of things that pupils (or rather their parents) will have to buy (exercise books, equipment and in lycées even textbooks are not provided by schools.) Teachers are notorious for having their own specific demands. Very often pupils don’t discover what they will have to purchase until the first day, leading to a mad scramble to get everything in time for the first lesson, (not a happy memory for me personally!) Every year this “rentrée scolaire” is a big public issue at every level, partly because education is so politically determined. This year the whole primary programme has been changed (very controversially) but I don’t want to write about that this month.

As I said, it’s not just schools that are concerned: almost every domain has its own “rentrée”. In politics ministers return (often suntanned) and this year the dramatic slowdown in the economy has necessitated a rather early start for some key ministers. Nobody wants to mention words like “recession” or “austerity measures”. This summer the hyperactive president Sarkozy has been so visible that members of his staff have been quoted as saying that for them there has been no holiday.

There is also the “rentrée littéraire”. France is a country which takes culture very seriously (there has been a minister of culture, often very highly profiled, in every government since 1958) and books in particular are discussed in all the media. During this period some 700 new books will be published, and the major publishing houses have already announced their lists. Most of these books will end up remaindered and then pulped probably, but the competition is keen and all the prestigious literary prizes are awarded at this time. It’s not just a matter of fiction either: books on all subjects, especially those with a “philosophical” aura are published, marketed and discussed. France, unlike Britain, respects what are called “intellectuals”, especially those with a philosophical orientation, and several are very present in the media. This could be the result of the fact that many people have had an exposure to philosophy when they were at school. (Last year’s subject was atheism, incidentally – I wonder what this year’s will be.) This important role of the intellectual in public affairs goes back at least to the Dreyfus affair at the turn of the 19th and 20th centuries.

Theatres and music venues will open again too. The Cité de la Musique starts off with an interesting jazz festival. The programme for the rest of the year is interesting too. The recently refurbished Salle Pleyel, and other places too, will all open again in September. The splendid theatre Les Bouffes du Nord also has a very interesting and varied programme this year, with concerts on Monday evenings.

So, even as I write the excitement of “la rentrée” is palpable, even if it hasn’t yet arrived. In just a few days everything will come to life again (Paris is a very dynamic city after all). Restaurants will again start displaying oysters and the rush of daily affairs will return to the streets and the metro.