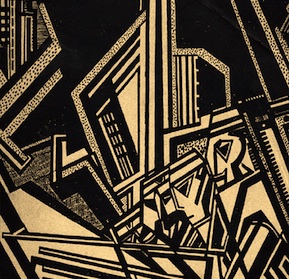 The Kali Yuga (1) An introduction

We live in confusing times. Distances in time and space have shrunk to almost nothing, yet we feel no nearness. An overwhelming mass of information is continuously available – twenty-four hour news presents fragmentary items (unrelated and for the most part incomprehensible) simultaneously and without order: the latest natural disaster, the latest sensational film, the latest “scandal” … Science provides a mass of fragmentary “knowledge” and technological applications which seem to address no conceivable human need. Anyone can express an opinion about anything – provided it is brief to the point of meaninglessness – and who is listening anyway?

Above all there seems to be no evidence of an ability to think about our situation. To adapt a phrase: we do not know, and we do not know that we do not know. The words of Yeats seem particularly apposite: “Things fall apart, the centre cannot hold”. Despite this (or perhaps, paradoxically, because of this) there is evidence of a malaise. The “values” of usefulness lead to a question which utilitarianism cannot answer: “What is the use of use?” (it cannot even ask it). But we need meaning, and so we look for it in strange places: consumption, distraction, meaningless sex, sport…Religions that originally taught love, forgiveness and hope are used to justify acts of hatred, vindictiveness and despair. When Nietzsche wrote about the death of God he meant the death of the old structures which had for so long given meaning – he certainly did not advocate nihilism but, on the contrary, a search for a new man.

To search requires first of all a real sense that something is lacking. Many traditions have expressed the idea that something has been lost, that man has fallen into his present condition of disunity from an earlier one of harmony with himself and with the world around him. To say that “things fall apart” implies that there is a movement away from order. The Sanskrit word for “order” is ṛta, which is the root of our words rite, ritual and right in the sense of true and good. Truth in this sense implies more than an application (as in logic) but the principle from which such an application derives its meaning. My opening paragraph was an inadequate attempt to depict a world without order, a world that has lost all contact with any principle. Yet perhaps there is a paradox here: just as something can be conspicuous by its absence, so the lack of any source of meaning creates a need for it, or at least a real question about where such a source could be found.

The very notion of a fall from an earlier state of unity flies in the face of what is one dominant notion (perhaps the dominant notion) of our confusing times – the idea of progress. To refer to a perhaps surprising source, D. H. Lawrence in the foreword to his Fantasia of the Unconscious wrote: “I honestly think that the great pagan world of which Egypt and Greece were the last living terms, the great pagan world which preceded our own era, once had a vast and perhaps perfect science of its own, a science in terms of life. In our era this science crumbled into magic and charlatanry.” He goes on to argue that such a science was once universal and was taught esoterically in all countries of the globe as men wandered back and forth from continent to continent. All this stopped with the melting of the glaciers, and a world flood that submerged Atlantis and divided mankind; this vast knowledge was largely forgotten, surviving only in fragments and myths.

The fact that symbols and myths, from the most diverse traditions, are so similar beneath their apparent differences cannot be a matter of chance. We are familiar with the Greek myth of the Four Ages of Man: Golden, Silver, Bronze and Iron. In the Hindu tradition this takes the form of a human cycle, called Manvantara, divided into four periods or Yugas. We are currently in the last of these, called the Kali-Yuga. While it would be absurd to put precise times to these periods, it is important to emphasize two points: these periods are not of equal duration, but become progressively shorter; although it seems as though we are nearing the end of the current cycle. According to the Hindus, mankind entered the Kali-Yuga some six thousand years ago, in other words long before what we call the “historical” period – which suggests that we should be cautious about any simplistic reading in terms of our current situation.

According to the Hindu tradition each human cycle derives from a principle; any manifestation necessarily implies an increasing distance from that principle until, in the final phase it is revealed once again, thus initiating a new cycle. This in itself can give an indication of how to think about our confusing times. It is not, in my view, a matter of blindly appropriating a fragment of an ancient teaching (that would be to become the victim of the very phenomena we are trying to understand). But if an increasing distance from any principle characterizes our age, that in itself indicates a direction. At this point I will refer explicitly to the work of René Guénon who has expressed these ideas with great lucidity.

Guénon was a French writer whose work consisted of a meticulous study of original sources (the Vedic Hymns, the Upanishads, the great Indian epics together with many other sources from the Christian, Islamic and Chinese traditions). It is important to emphasize that the ideas he expresses are not his own; his considerable achievement was to clarify and discriminate, without making any concessions. His works are well translated and in print. They are not obscure, but they do demand careful reading because so much of what these traditions express represents a challenge to our habitual ways of thinking. For those wishing to explore his work further in the context of the questions raised in this article I can particularly recommend The Crisis of the Modern World and The Reign of Quantity and the Signs of the Times.