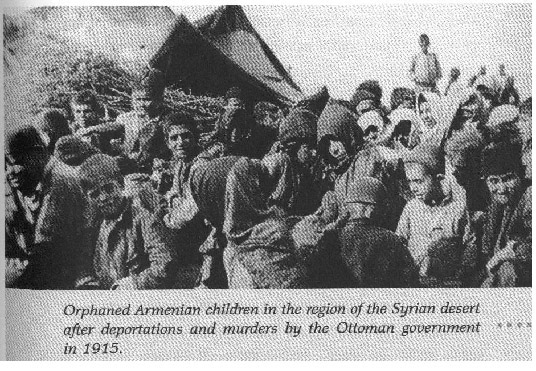 The history is well documented, and although we do not know the exact death toll, it seems to have been about a million and a half (after the death of several hundred thousand in the pogroms of 1894-96 and 1905). Pope Francis recently referred to what happened in 1915 as genocide, and Turkey promptly protested. Until relatively recently anyone who dared to write or say anything about it in Turkey was imprisoned and denounced as a traitor. Now it is admitted that many were killed, but supposedly in the context of the First World War, and genocide is still denied. Meanwhile, over many years, almost all the Armenian churches in what is now eastern Turkey have been systematically destroyed. Only a few of the most famous- the church on the island of Aghtamar in Lake Van, and the ruins of Armenia’s medieval capital Ani- remain.

The massacres were directed by the Ottoman government under the “Committee of Union and Progress” (sic), that is, the Young Turks. Talat Pasha oversaw the killings, and in August 1915 told the American Ambassador Henry Morgenthau (a key witness in all the histories): “It is no use for you to argue….we have already disposed of three-quarters of the Armenians; there are none at all left in Bitlis, Van, and Erzerum….”. Those not murdered were driven into the desert. Most died, a few made it to the Lebanon.

It was not a racial genocide, but a religious one, in which Turkish and Kurdish Muslims murdered Armenian Christians. The Ottoman Empire was again at war against Christian Russia (as it had been in 1878), and all Christians were in peril.

Although the genocide was inspired and directed from Constantinople it often happened that once it has begun, neighbours started murdering neighbours and did not stop until the massacre was complete eg in Diyakabir, where over one third of the population were put to death.

Can there be reconciliation? Germany admitted its responsibility for the genocide of the Jews, it has paid huge sums of reparations to individual families and to Israel, and has fostered the revival of a Jewish community in Germany. The Turks have never admitted what happened, and so there remains great bitterness amongst Armenians worldwide. It is very hard to forgive, even a minor insult. There has not emerged either a Turkish or an Armenian Mandela…

See, for a historical account: “Great Catastrophe: Armenians and Turks in the Shadow of the Genocide”, by Thomas de Waal, Oxford University Press.

The story of a survivor from a massacred family: “The Road from Home. The Story of an Armenian Girl”, by David Kherdian.

A concert at the South Bank on the 3rd May 2015 has a very special programme, including Gorecki’s Symphony Number 3 and music by Armenian composers. It is thoroughly recommended:

The ferocity of the Turkish denials-an interesting article about this on al-Jazeera: http://www.aljazeera.com/indepth/opinion/2015/04/ankara-trigger-button-armenia n- genocide-150421065130057.html