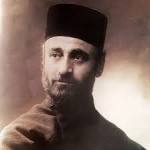 At the Royal Festival Hall, Sunday 3rd May 2015

The evening was introduced by Dr Armen Sarkissian, the Armenian ambassador, who reminded us of the genocide in 1915. I found the concert, entitled “Music for Armenia”, rather strange. It began with dramatic music for orchestra and chorus which sounded like opera, but was part of Mozart’s Requiem. Then came the second movement of Gorecki’s much-loved (by those who know it) Third Symphony, the Symphony of Sorrowful Songs. It has an unusual score in that it includes a piano with a small but significant part, and a soprano voice. A good choice for the occasion, but it needs a very special voice which can soar above the orchestra and yet be gentle and truly sorrowful, as in the only recording of a live performance with Zofia Kilanowicz – see http://www.in-between.org.uk/music/gorecki/

A short piece for violin and orchestra by the noted Armenian composer and priest Komitas followed, and then two touching liturgical pieces by Makar Yermaklian, who was the teacher of Komitas. The second half was devoted to music by Armenia’s best-known composer, Khachaturian. An excellent performance of the violin concerto, which deserves to be better known, and finally, excerpts from the orchestral suites from his ballet Spartacus, with the very well-known Sabre dance as a rousing finale, which had the audience on their feet cheering. Well… yes…but were we remembering the genocide? Wasn’t that why we had come?