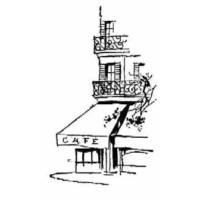 Once upon a time in New York…

There was once such a place. Remarkably, it was in the country which had the world’s worst coffee and later established the largest chain of cafés in Europe for its terrible liquids. Yes, America. The Peacock Café in Greenwich Village, in the days when it was in West 4th Street, came perilously close to the ideal. A number of rather expensive but definitely drinkable and interesting coffees, a range of good cakes, not too sweet, unspoken permission to linger for as long as you like….One could be at ease because genuinely no one was in a hurry; the customers were never there for less than an hour and usually much longer. The coffee was good because the variety came from the coffees themselves, not from the amount of milk. Only one thing was missing: a waitress with a mole by her adorable navel, like Scheherazade. One had to bring her along.

At about half-past one in the morning the café would be full when there would enter Rupert, Prince of Bohemia. A man of uncertain age with a large, greying beard and wearing, in winter, a coat much too large for him which made him seem enormous, he would offer in his deep voice a selection of magazines. Not a remarkable selection in any way: Time, Life, Mad Magazine, last Sundays New York Times Book Supplement, The Village Voice…. at prices above their normal selling price. But then, he was delivering them right to your table in the early hours of the morning. No pornography- he never offered us Screw, for example- but was that because we were not the right kind of customers?

When he stopped at out table we would greet each other like long-lost friends, consider his magazines, buy one, and then discuss and share in his dream: to have his own little shop in the Village. This was the dream which kept him going as, over the long years, his modest income kept him alive. He had no other job and we never discovered where he lived.

Once we were in a bar when Rupert entered. We were distressed to witness the stupid clever wisecracks that greeted him, entirely lacking in that real humour based on an acceptance and love of humankind with all its frailties. We were, in any case, ill at ease there, too respectably dressed. I had an ironed shirt with tie and jacket, my lady a skirt and no benefit of cleavage. When he saw us, Rupert’s face relaxed, and so did ours.

I was last in The Peacock more than twenty years ago. The Village was already much changed, and The Peacock had moved to Greenwich Avenue. The same friendly proprietor was there, the coffee and cakes still good, the ambience… somehow different. But can things not change? If The Peacock still exists, the proprietor, and Rupert, both older than I, cannot possibly be there any more. It had for at least thirty years honourably stood firm against the tide of boutiques until, I don’t doubt, swept away by the latte tsunami.