Why do we watch films? Why do we “like” some films better- even much better- than others? And when we remember films we saw long ago, or perhaps see a second time, is our judgement the same? What is it we “like”?

We want to be taken by the film, to be transported to another world, another life. We each have some habitual preferences- I want to identify with the hero in a thriller, to be entertained by comedy or clever repartee, to hate utterly the villain, to experience once more the thrill of romance, or to be taken by wonderful photography or brilliant acting or sheer speed….

My friend was stirred by the love affair in “The English Patient” and quite bored by the other characters, but another friend said it was “romantic tosh”. Chacun à son gout?

When you look at the choice of 10 or 20 or 100 best films by film critics, you can see the big role played by technique in their choices. “Citizen Kane” was brilliantly acted, photographed, and above all, edited; many people at the time found it difficult to follow, the pace was too fast. It is still exciting to see- a visual thrill. But the heart is not touched by any of the characters. Is there in the film any understanding?

What really were the special qualities of the films of Satyajit Ray (“Pather Panchali”) ? It is true that the director also wrote the screenplay and the music and designed the sets…. One day I realised that this director did not judge his characters. They all had faults, there were no “heroes” or “villains”, and one might sympathise more with one than with another, but by the end of the film one could feel the strength of the forces which had moved them, sometimes in a way which was shocking but they could not help but be like that….. just like us. And so, one’s understanding of the human condition was widened. Indeed, perhaps he even loved all his characters. And without love, who can understand? 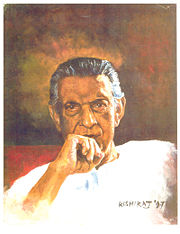 Satyajit Ray as a young man, a later portrait and Wide open eyes-a continual motif in the Apu Trilogy