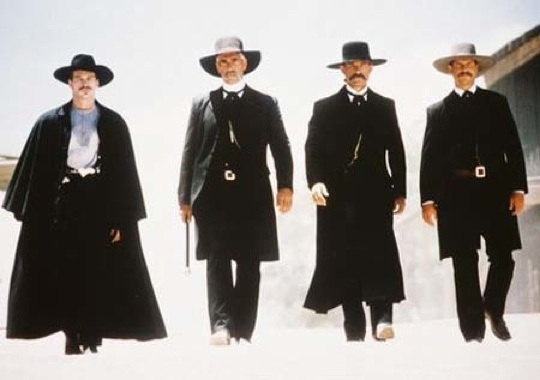 Many in Britain may not know that Wyatt Earp, Doc Holliday and the Clanton villains existed, and there was a fight at the OK Corral (although some say there was not). Wyatt later went to California, where John Ford met him, and heard the story from him at first hand (of course, Wyatt’s version). Recently some letters were found, written by women in Tombstone who witnessed the final fight, but at the key moment, they were not looking. Who shot first? Some say it was Doc Holliday, a gambler and, some say, a murderer. (Or had he killed only in self-defence?) Did any of the opponents survive? It is said that two of them did- and that is the basis of Hour of the Gun.

Although there is some basis in fact, a mythological story has grown, of which differing versions are given in the above films. The context is “the end of the West”- that is, the final phase of the opening up of the American West: mining for gold, the building of the railroads, rustling of cattle, tensions between farmer-settlers and nomadic herdsmen, gambling, whorehouses, and conflicts between the imposition of the law by sheriffs and gunmen who sometimes kept some order where otherwise there was none, and sometimes were robbers and outlaws. In this setting, the stories are of fights for “justice”, the righting of wrongs- in other words, vengeance. The brutal murder of one of Wyatt’s brothers is the mainspring of the action. The other is an extraordinary friendship that developed between Wyatt and the tubercular dentist, Doc Holliday, after they met in Tombstone.

My Darling Clementine is not one of John Fords best films, though Henry Fonda is always good, and Victor Mature not at all bad. The key element is the relationship that develops between the two principal protagonists- can we understand it? On this point, Ford’s film is so-so, and The Gunfight at the OK Corral a disaster. It begins badly with appalling theme music, which we have to endure several times. Both Burt Lancaster and Kirk Douglas are quite miscast, there is no spark between them and no believable bond. The part of Doc’s whore is miserably written and quite without interest, while Wyatt has a boring romance. After such a disappointment, the same director, John Sturges, makes amends with the surprisingly good Hour of the Gun, which might be called Gunfight at the OK Corral Rides Again, continuing the story of Wyatt and Doc after that shoot-out, in a further fight with two of the Clanton gang. The lead players in this old-fashioned western are excellent, believable. Wyatt Earp is self-indulgently long and slow, Hackman not bad as Doc, Costner completely uninteresting. I did not even watch this one to the end.

The real surprise and the best of the Wyatt Earp movies is Tombstone, beautifully played by two actors unknown to me, and the developing friendship between Wyatt and Doc subtly and touchingly portrayed; one can believe that it remains firm in the face of severe illness and the likelihood of death. There is a decent part for Doc’s loyal, loving whore, who stays with him in the sanatorium from which he absconds to support Wyatt Earp at the crisis.

Al does not appear, but in The Gunfighter we have Jimmy Ringo, reputedly faster than Wyatt on the draw; who knows if it’s true. I was surprised to see Gregory Peck – with a moustache!- in a Western (in fact, he appeared in a few). The end of the West is approaching. There is no future for a gunfighter- he is pursued, not so much by the law as by young upstarts who want to prove themselves- exactly as he once did- in being faster. But there is no leaving the past behind, and the hero is the last to realise that that is a dream. This, and Tombstone, are outstanding Westerns.