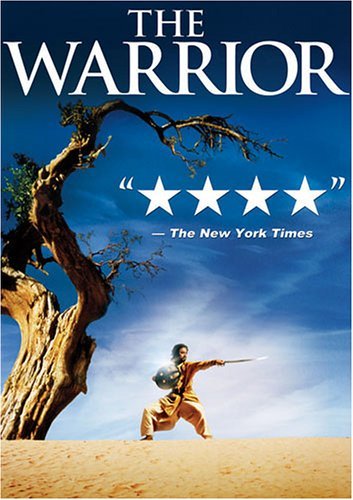 The Warrior, directed by Asif Kapadia, with Irfan Khan. GB/Fr/Ger/Ind, 2001. Available on DVD.

Once upon a time, long ago…. in north-west India (it looks like Rajasthan), villages had to pay tithes to the local power-possessor. An old man from one village says he can bring nothing, because of a drought. The lord orders the head of his “warriors” (Khan) to execute him- and he cuts off the old man’s head with one blow of his sword. The warriors are then told that they must exact revenge on the village, and go off on horse-back, burn the village huts, slay the men, rape the women and then kill them also. The chief warrior is about to kill a young girl when he realises that she is wearing his own son’s pendant round her neck- in a brief earlier scene the two youngsters had exchanged keepsakes.

The warrior stops…. Suddenly he sees… he realises what he and his men have done. All around is a scene of destruction, carnage, murder…. and he leaves the girl and goes to a shrine to vow that he will kill no more. But he has forgotten to watch his son, who is captured…. And no warrior may leave his lord, so the head warrior’s deputy is told to bring back his head, and pursues him everywhere, destroying other villages, and finally catches up with him in the mountains….