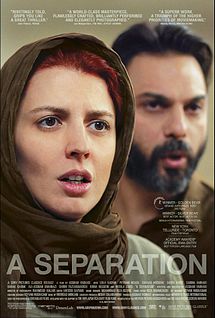 The film begins with a husband (Nader) and wife (Simin) in front of the local magistrate. She is petitioning for a divorce on the grounds that the husband refuses to move abroad with her and their 13-year-old daughter (Termeh). The husband insists that he must stay and care for his father who has Alzheimer’s disease. The case is dismissed but Simin leaves and goes to stay with her mother, whilst Termeh chooses to remain with her father.

The immediate consequence is that Nader is forced to recruit a carer to look after his father whilst he is at work. However, after a dramatic turn of events, ending in an alleged transgression against the carer, Nader is again in front of the magistrate being sued by the carer and her husband. If their lawsuit is successful then Nader faces prison and will be unable to care for his father and daughter. Whilst the lawsuit provides the main dramatic thrust, this film is much more than a courtroom drama. Shot in a documentary style with no soundtrack, the characters are introduced and the drama slowly unfolds in an understated manner until Nader’s alleged transgression against the carer and the resulting court case whereupon the film becomes something of a whodunit.

Although my interest was strongly engaged right from the start, I was not emotionally absorbed in the drama taking place nor engaged in judging the characters and taking sides. Instead, I felt sympathetic to each of the characters. Particularly touching was the great care and affection shown by Nader towards his father (depicted without sentimentality). Termeh and Simin also showed this same care and although Nader’s father had no dialogue, the depiction of this care served to dignify and bring the character to life in a very pleasing way.

The nearest we get to a villain is the carer’s husband; unemployed and debt ridden he pursues the case against Nader with great vehemence. He rails against the magistrate, convinced that due to his lowly status, he is not getting a fair hearing. And yet even though this character was trying to capitalise on his wife’s suffering, I felt sorry for him.

As the film progressed, I found myself questioning the motivation of the characters and wondering what each character was leaving out of their accounts of their role in the drama. I felt that the director was allowing me to make up my own mind and no obvious answers were provided. It became apparent that the answers may have been revealed in scenes at the beginning which then prompted the question: where was my attention? Interestingly in a later scene, Termeh questions her father about his transgression against the carer and he tells her that he lost his attention for a few moments. I found this to be a very striking way to express the reason for such a lapse.

In summary, I found much to commend about this film. The director showed humanity in his treatment of the characters. Being called to question the characters and my own attention, made me feel like a participant rather than a passive viewer. Finally I did not get a sense of any true animosity between the main protagonists. Rather, this felt more like a story of people trying to hold their lives together under very challenging circumstances. I felt called to try and appreciate this film by making an effort to watch attentively.