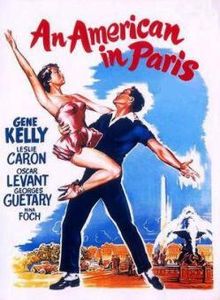 As well as being a modern capital city, with its share of the real difficulties such places have to confront, Paris is a historical and cultural centre which attracts millions of tourists throughout the year. Behind the realities of the city, there are a number of myths: when people come to Paris, they are (in part) attracted by ideas about it that have come to them from many sources, but perhaps none as potent as cinema. As a medium which has the capacity to convey “reality” and imagination (the two tendencies can be seen in the first years of its history in the work of the Lumière brothers and Méliès) cinema almost immediately became a means of expressing the “myth” of Paris. The history of this representation can be seen in an interesting exhibition at the Paris Hôtel de Ville, and I thoroughly recommend it. A link to the site (in English) can be seen here.

The exhibition is made up of numerous film extracts, together with photos, posters, costumes and other memorabilia. Although it concentrates on the image of Paris as conveyed by Hollywood, there are a number of extracts of French films, particularly of the New Wave in the 1960’s, when lighter cameras enabled film makers to go out into the street to show “life as it is” (Godard’s A Bout de Souffle – Breathless – is an obvious example of this trend). During the period of the exhibition, several Parisian cinemas are screening a number of the films which are featured.

What emerged for me were those aspects of the myth of Paris which still influence how we imagine the city. I was struck by the opening extracts, very much in the Lumière documentary tradition. There were a number of short films consisting of a simple pan through crowds of people walking in the sun. There were technical reasons for this form: cameras needed a lot of light (the very first films were shot in the south of France) each shot could only last for one minute, and editing techniques were very rudimentary. I was fascinated by one from 1900 showing a crowd at the champ de Mars (near the Eiffel Tower, one of the totems of the Paris myth, which had only been completed eleven years previously). It’s the Paris of Proust: elegant women with parasols abound (the camera tends to follow them) and everyone is dressed up, even the children. Even at its most “truthful”, the myth is powerfully present.

One of the important themes in Hollywood’s representation of the city is as a place of elegance but also of decadence (alcohol, drugs, bohemianism) where the norms of morality are easily breached. Later versions of this theme are the sophisticated (and rather immoral) comedies of Ernst Lubitsch (but in his ten films involving Paris, not one scene was actually shot in the city) and after the war there were a number of musicals exploring similar aspects of this image (a fine example is Minelli’s An American in Paris ).

Historical themes also figure prominently: Paris as a medieval city (there have been several versions of The Hunchback of Notre Dame) but also of the Revolution, with a considerable concentration on the figure of Marie Antoinette. The elegant individualism of the swashbuckler is another aspect which featured almost from the beginning, from Douglas Fairbanks onward, with adaptations of The Four Musketeers and Scaramouche for example. Although there have been some Hollywood films which have dealt with contemporary themes (for example Roman Polanski’s Frantic) these are marginal and very much the exception. Woody Allen’s Midnight in Paris is much more in line with the tradition.

By coincidence, there is a big retrospective of the work of Marcel Carné at the French Cinémathèque. There is also an exhibition, with a particular emphasis on a newly-restored version of Les Enfants du Paradis from a scenario by Prévert (another version of the myth of Paris, but seen through French eyes, during the Occupation). There is also an exhibition of the contribution of Jacques Prévert to the poetical realism of French cinema.

Finally, I would like to recommend two films by Robert Bresson which give a special vision of the city: first his masterful Pickpocket, and second his poetic Four Nights of a Dreamer, based on a short story by Dostoyevsky which is unfortunately not often shown, but should on no account be missed. The opening, which shows the bateaux mouches at night, remains for me one of the most haunting visions of Paris on film.