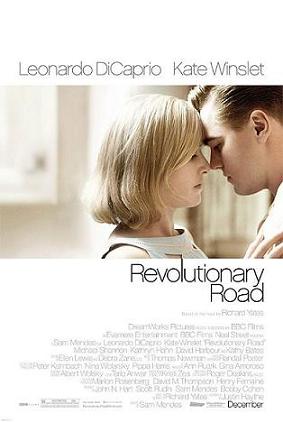 Directed by Sam Mendes, with Leonardo DiCaprio and Kate Winslet Available on DVD

A married couple in the 1950s with two young children, the husband with a job in a large corporation, the wife at home in a nice suburban house….. The story begins with the end of an amateur theatrical performance in which the wife has not excelled. He keeps trying to comfort her by saying it does not matter and is so insensitive to the fact that she does not want to talk about it and simply wants to be left alone that very soon they are quarrelling quite angrily. It passes, but one is left wondering about the relationship, and there are scenes later (sometimes we sympathise with the wife, as in that scene, sometimes with the husband) leaving a sense of disquiet.. Soon the wife is urging him to leave his job, sell the house, and for them all to move to Paris, where life is different! There, she will work, and leave him free to decide what he really wants to do- it cannot possibly be to continue in his boring job at that corporation (where his father also worked, in a lowly paid job). She remembers his aspirations when they first met, and she wants him to fulfil them.

Is this another dream- or is it a real impulse to live life more intensively? At first he is aghast at the prospect, then he is persuaded, and they start making plans, and he tells his colleagues that they are leaving. Meanwhile, he is having a casual affair with a young woman at work. Something comes along to upset their plan- he cannot see how they can pursue it, she insists it is possible, a much more serious quarrel ensues and a neighbour’s schizophrenic son blurts out some telling impressions.

This story of two people caught… caught in what? In their dreams about themselves?…unable to relate at a deeper level– stays with one. These two humans, not very sympathetic, quite ordinary, are lost, and we feel it.