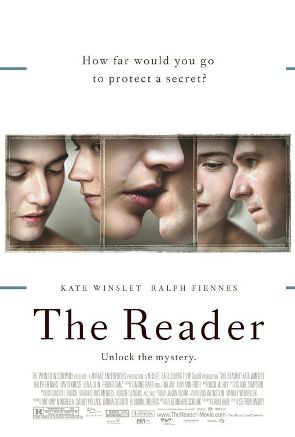 It is some years since I read the book, which the film seems to have followed closely, though I do not remember the final scenes with the rich Jewess, and with the daughter in the graveyard.

The story hinges on something I found quite improbable, but I willingly suspended my disbelief in order to follow the fate of the German boy who, at much too early an age, has a passionate affair with a significantly older woman. She mysteriously disappears without a word, and then the boy, now a law student, accidentally happens to be at her trial as a war criminal. The crucial section of the film delineates his response to this traumatic situation. Kate Winslet was much praised for her portrayal of the woman. The book gives us little insight into what she thinks and feels other than her overwhelming imagination concerning what others might think of her with regard to one particular lack, and the film wisely does not try to fill the gap. We are left at a loss, trying to understand her. I do not think- and this is not a criticism of either the woman as a human being, or of the film- that she can be considered “normal”. How did she become like that? We do not know.

Ralph Fiennes made a stronger impression. The fact that the man he played had a failed marriage is just mentioned by the way, but is part of his story. His whole life was marked by his encounter, and his attempt to atone, for himself, and for her. One feels for them both, but we can get closer to him in his distress.