Recently I watched a film and suddenly woke up to question… The film was Viva Maria! directed by Louis Malle, who has made a number of films which are, at the least, interesting, and certainly one that is outstanding: My Dinner with André. 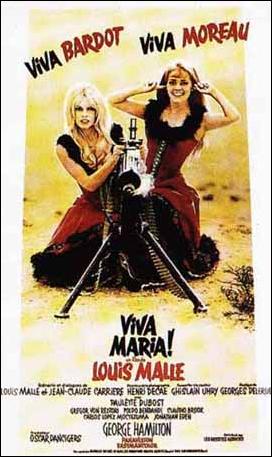 Viva Maria! begins with an Irish patriot trying to blow up all things British. He is assisted by his little daughter, first acting as look-out but soon graduating to pushing the plunger into the detonator. It is quite fun, some things are blown up but we do not see anyone being killed. It’s like a game. The girl turns into a ravishing young woman- Brigitte Bardot, no less- still assisting her father, who has moved onto bigger projects, like bridges. We see one of them go wrong, and he himself is blown up.

His daughter does not seem heart-broken (the whole film is “light-hearted”) and she joins a travelling group somewhere in Latin-America at the beginning of the twentieth century where, together with Jeanne Moreau, she learns to sing, dance, and do a modest striptease to reveal colourful underclothes, singing about “Gai Paree!”. Inside her caravan she begins to list the names of the young men she beds; it is all very tuneful, colourful and amusing.

Moreau’s lover, an ardent revolutionary fighting for FREEDOM against the wicked despotic régime, is killed, whereupon Moreau takes up the cause for JUSTICE and enlists Bardot, who rediscovers her revolutionary zeal. Together, “against great odds”, they infect the population with such a fervour for FREEDOM that the whole country is roused to revolution. A cannon is blown up, a machine-gun captured, transparently evil despots get their JUST DESSERTS. It is all light-hearted, beautifully filmed, and very entertaining. But seeing the scenes of light-hearted carnage I was suddenly reminded…. of the Arab Spring, Afghanistan, Iraq, Syria… people chanting for FREEDOM, DEMOCRACY, killing and being killed. Is this fun? 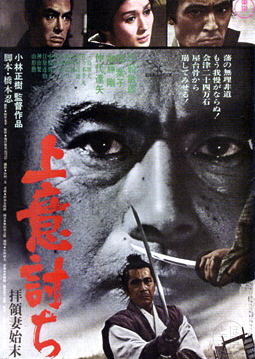 Many years ago I saw a film by the great Japanese film director Kobayashi, little known in England (and alas, some of his greatest films, like Kaseki, have never become available on DVD). The film was Samurai Rebellion, set in mediaeval Japan at the time when the country was rigidly ruled and strictly divided into districts with guarded frontiers, each ruled by a Lord responsible to the Shogun. The story concerns the middle-aged Samurai (Tishure Mifune) who is one Lord’s master swordsman; we see that one of his young Samurai is very ambitious and guess that he wants to supplant his master.

One day a messenger comes with the news that the Lord’s wife has borne him a son and heir, and consequently the Lord is dispensing with the concubine who had previously given him a son. The order is that the master swordsman’s son is to marry the concubine and also accept the child into his family. Father and son are shocked, but obedience to the Lord is the unquestioned rule, so, gloomily, they accept it. Movingly in a few scenes we see how the frightened and unassuming young mother shows her own willingness to accept her fate, care for the child and fulfil her duties. Father and son grow to love her, and we are shown an affectionate and harmonious family.

One day another messenger comes. The Lord’s son by his wife became ill and died, and the former concubine’s son is to return to the castle..

Father and son decide to refuse this monstrously unjust and inhuman order. Mayhem follows, with the greatest sword battles I have seen on film. A Master swordsman indeed, aided by his courageous son, and sustained by an overpowering sense of injustice, they kill many of the Lord’s warriors. Suffice to say that the son is killed, so is his young wife, and the Master swordsman flees with the child towards the frontier. Hearing horses hooves, he hides, and the horsemen pass. Despite that, he continues with the child to the frontier, where he is met by the ambitious young Samurai. Although near exhaustion from his fighting and his flight, the rebel summons all his remaining strength and slays the young man. Whereupon he is shot with a musket, and the child is taken to the castle.

What do rebellion, revolution, war, achieve? 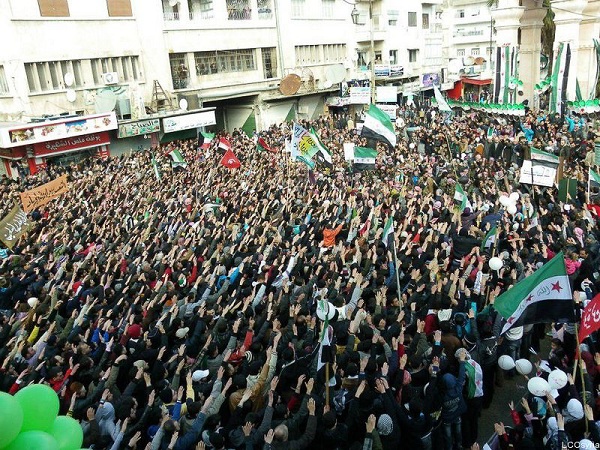 Reviews of other films about war: