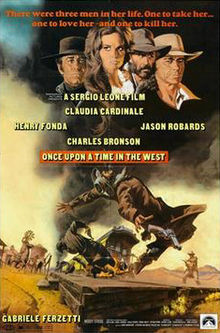 One of the greatest Westerns, and possibly Sergio Leone’s finest ever film, this Western grips the viewer from the first opening scenes which are intercut with the introductory credits. Three sinister gunmen gather purposefully at a remote railway station somewhere in the old West of America. The timid looking stationmaster takes one look at the men and runs away. They stand impassively, waiting, as the sound of an approaching train gradually builds. It is not until the train draws away from the station that an equally impassive, solitary man is visible standing on the other side of the track, who starts to play a haunting melody on a harmonica that is strung around his neck….. Not a single word is spoken in the build-up to this confrontation, and the tension is amplified by the incidental sounds of doors slamming and the station sign creaking in the wind.

From this brilliant beginning, two interweaving stories develop. The first concerns the struggle for control of a patch of land called Sweetwater which as the name implies contains an important water source that will determine the location of a town for the new railway. This land belongs to a recently married farmer but is coveted by the railway owner. The other story is about familial love and revenge. Charles Bronson plays “Harmonica”, the enigmatic loner whose reason for arriving in the remote community is unclear. Henry Fonda is cast very much against type as a ruthless assassin on the payroll of the railway owner who kills anyone in the way of his boss or his own plans for financial gain. Jason Robards plays a rather comedic bandit called Cheyenne who adds some moments of levity to proceedings and ends up working with Harmonica against the evil railway company. Finally, Claudia Cardinale plays a former whore, just married to the owner of the Sweetwater land who arrives only to find that he and his family have been murdered by Peter Fonda and his gang.

To say more about the plot would spoil the enjoyment for the reader. But there is one very particular quality about this film worth mentioning. Ennio Morricone wrote the musical themes for each of the main characters before the script was developed and they are highly evocative. The cinematography of the film is breathtaking. You really get a sense of what it was like when the old west was being opened up by the development of the railways and the struggle that farmers faced to grow food and keep their land.

The film slowly builds to a stunning climax and it is only right at the end of the final shoot-out that the shocking reason for the harmonica playing of the main character is revealed. And you will be humming the main theme tune of the film for a long time afterwards. Highly recommended!