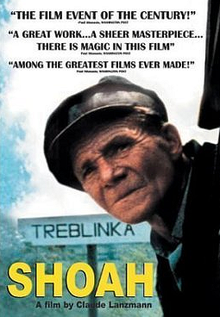 The BBC showed this landmark film recently to commemorate the seventieth anniversary of the liberation of the Auschwitz-Birkenau death camp at the end of January.

It uses a simple format – question and answer interviews with survivors of three camps (Chelmno, Treblinka and Auschwitz-Birkenau), former Nazis, local residents and a Polish man who managed to enter the Warsaw Ghetto and attempted (unsuccessfully) to persuade the Allies to intervene and rescue the inhabitants before the mass deportations to the death camps began. Some of the participants in the film were filmed secretly. The face to face interviews are intercut with tracking shots of the death camps as they are now whilst the conversations are taking place.

There was much controversy over the film in Poland when it was released because it was perceived to present many of the bystanders to the terrible events of the Holocaust as anti-Semitic, when in fact there were many attempts by the Poles to rescue Jewish families. The film also does not dwell on the terrible suffering by non-Jewish Poles at the hands of the Nazis.

And yet, this is a film that deserves to be watched attentively because it brings home the unspeakably terrifying and brutal conditions of the time in a deeply personal way. Unsurprisingly, this is not an easy film to watch, but once I had started watching, it was impossible to stop. The simple, heart-wrenching honesty of the survivors is starkly contrasted with the evasive justifications from some of the former Nazis.

It does not seem appropriate to highlight any individual account, but within the great darkness of these events, small embers of extraordinary courage and sheer will to live emerge. The result of watching this is a searing question. How is it possible for us to be capable of such collective barbarism? Having watched the film, it was deeply moving to hear one of the few remaining survivors of Auschwitz-Birkenau at the seventieth anniversary commemoration pleading for tolerance between religions and countries.