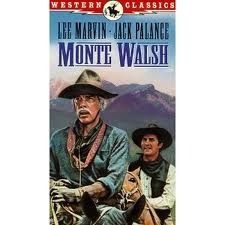 The “end of the west” as it once was. Not only has the railroad come, but federal laws, and Yankee capital to change the whole way of life, especially for cowboys no longer wanted, as huge areas of land are fenced in. One cowboy marries a widow and runs her hardware store, but Monte (Lee Marvin) loves the life of a cowboy too much to give it up. He speaks to his girl friend (a whore of course) of the alternatives: he could settle down with her and find such a job too, but how would he feel? Unexpectedly- for we have not yet got to know her- she supports him in his refusal to conform to the new era. Her wish is that he remains true to himself. This is an unusual girl friend for a cowboy! That she has a real affection for him is touchingly conveyed by the young Frenchwoman with a warm and gentle face. Who is she? When it turned out to be Jeanne Moreau, I could not believe it- so open and innocent.

A Yankee (a brilliant cameo by Wallace Shawn, of My Dinner with André) offers Monte a job in a touring “Wild West” show, for which he would have to wear a costume no real cowboy ever wore, but Monte refuses: “I ain’t spittin’ on my whole life”. As there are fewer and fewer jobs and cowboys are laid off, one of them rides over a cliff, others turn to rustling cattle and, in desperation when pursued, to murder. Reluctantly, Monte finds himself in the role of the avenging gunman.

Free both of the gratuitous violence that disfigures some later westerns, and of black, cardboard villains, we find ourselves immersed in a world of change. But we, too, are in a changing world. Does it help us to question what it would be to be “true to myself”?