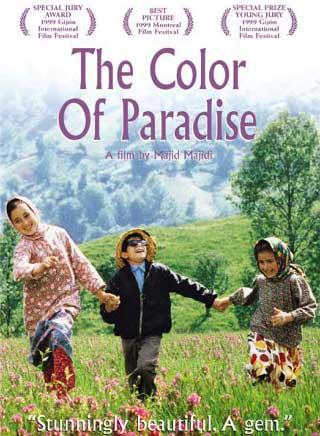 The little boy Mohammad (Ramezani) is at a blind school in Teheran waiting for his widower father to fetch him at the end of term. The father arrives very late and tries to persuade the teachers to keep him. Reluctantly, he takes him back to his village. There, he meets again his grandmother and his two older sisters, who all love him; they smile as with his hands he explores their faces. The grandmother takes him in a field to a tree he planted the year before, and he reaches out his hands. How it has grown! For the first time I felt how it might be to be blind.

For the father the boy is merely a burden, and he curses fate, that he has lost his wife and has to look after Mohammad. The boy wonders why God has left him like this. The father has made plans to remarry, but needs to take the boy away first, away from the only people who love him. Although the story which unfolds is a sad one, the boy is so touching that it is beyond sadness. It so happened that one life was like this…. No need to judge, or “explain”.