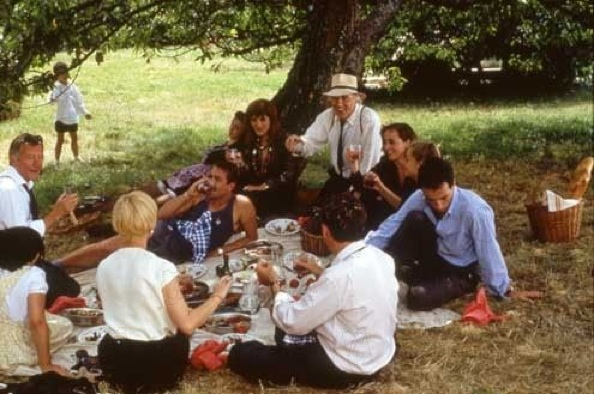 Available on DVD, in French with English subtitles

Malle has made many films, at least one really memorable one (My Dinner with André), some good ones (such as Vanya on 42nd Street), and some…. well, disappointing. I saw this only because I read that it was one of his own favourites. I wanted to see what he himself liked. It turned out to be a wonderful surprise. How is it no one has told us about this film?? It is light, genuinely funny, and yet treats its characters with affection, though their foibles are magnificently exposed.

Milou (Michel Piccoli) lives in the country and looks after his mother in a large, rambling house, with a large, rather wild garden with many trees, a stream, and a neglected vineyard. When the mother dies, the relatives come for the funeral, some with young children, and to squabble, virtually at once, about the inheritance, and to eye possibilities with the other sex. It happens to be May 1968 and on the radio and from some of the visitors we hear of the riots in Paris, the threat of revolution, firm views for and against which are forcibly expressed. Because so many take the opportunity to go on strike (this is France), the funeral has to be postponed, and all around the dead mother lying in state, furniture, silver, china and paintings are divided, and jewellery is secreted away while illicit liaisons are unhesitatingly explored. Fearing attack by communists, all flee to the woods….