This film was on in London recently- it may still be showing somewhere now (11.7..07)- check papers for listings

How would we live in a police state? Would we keep our heads down in the hope of staying out of trouble? Would we resist, heroically? Would we try to escape? Or would we become spies, or informers?

This film about life under the communists in East Germany and the surveillance by the Stasi (State Secret Police) gives one a taste- but what it must have been like to live for more than forty years under such a regime, is beyond imagining. How is it that such states can find, tens, hundreds of thousands of spies and informers? (In Mao’s China, it must have been millions). In such a society, there is no doubt that the scum rises to the top. The leaders are not idealists- those are quickly eliminated- and the power-possessors are completely cynical, simply exploiting the system to advance themselves for money, power, and sexual favours.

This is a tough film to watch. There is no “violence” in the usual sense- no one gets beaten up or tortured (though in fact torture took place on a huge scale). Instead, pressure is applied- the threat that wives and children, or lovers, will be abducted or at least lose their jobs, or that a witness who talks will be taken away, may well be enough to silence someone, or lead them to inform. We see the ambivalence of those who, somehow, “decided” to stay…..and even work with the regime, in the name of keeping alive a spark of humanity. But what are the consequences of that? Can one’s conscience be stilled?

The Stasi had records on literally millions of its citizens. After the wall came down, and reunification, anyone was entitled to look up their own records. Many did not know they were intensively surveyed- their telephone calls, all their conversations at home, but realised someone must have informed on them. Who was it? Sometimes, a member of their own family……Easy to pass judgement, but what pressures were people under?

One wonders, too, whether there can be any spark of humanity left in a member of the Stasi. And yet, there have been stories from inmates of concentration camp that there were guards who were not completely dead inside…..But the leaders…. In the Kali Yuga, they often survive.

This film is very well acted. And directed- one feels a certain calm, and impartiality.

One character does not take any of the four possible paths listed at the beginning. How did that come about? Was it a choice? Where did the impulse come from? 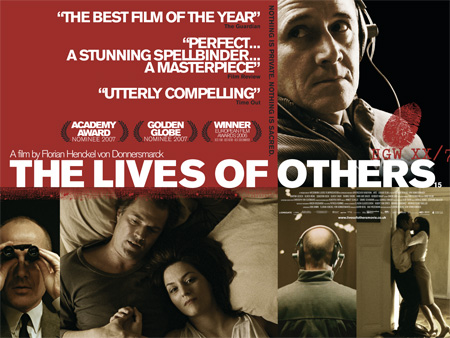