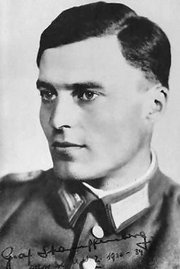 Claus, Graf von Stauffenberg, who attempted to assassinate Hitler on 20th July 1944, and was executed, as were many, many others.

This is an unusual book- a meticulously researched work of history, much of which reads like a thriller- a very well-written one. We know the outcome, and yet keep desperately wishing, as we read, that it could have been different. The author succeeds in giving us an inkling- it cannot be more than that- of what it must have been like to live through those years, and the conflicting ideas and feelings of those who loved their country, whose best values and culture they saw being destroyed all around them. One can understand that “What shall we do?” was truly an agonising question- the feelings of utter dismay, revulsion, helplessness, fear of betrayal, foreseeing the worst and yet not daring to make a move…. What would I have done? Whom could I have trusted? In the face my own inner conflicts, what could I have trusted in myself?

Not many people in England know much about the attempt on Hitler’s life in 1944, which failed, and the general view seems to be that it was not only ineffectual, but that there was very little resistance. In fact, there had been earlier assassination attempts in November 1939, March 1943, and early 1944, and there were intermittent arrests of all kinds of resistance groups and leaders. Resistance was very widespread amongst many diverse groups of people: those politically both on the left and on the right, the aristocracy, officers of the army, devout Christians, and many who cannot be pigeon-holed, who were simply appalled by Hitler and his regime. There was already a plot in 1938, despite Hitler’s apparent success then, and a contact with the British Foreign Office at that time lead Lord Vansittart to comment: “But that is treachery!” When, after the failure of the 1944 attempt, the ring-leaders were shot and more and more plotters uncovered, Hitler was so appalled by the extent of the opposition that all news of trials and executions was completely suppressed.

That all this is so little known in England is an interesting fact in itself, as also that the several attempts by the plotters to make contact with the allies (through intermediaries in Switzerland and Sweden) to arrange a surrender on the western front were all rebuffed. One consequence of the unyielding policy of “unconditional surrender” was that, between the date of the assassination attempt on 20th July 1944 and the end of the war on the 8th May 1945, a further 4.8 million Germans died (2.8 million had died in the preceding five years). After the war, publication of an account of the 1938 plot was forbidden in England.

One of the factors which greatly hindered Hitler’s opponents was the effect of the bombing. Military historians doubtless regard the early attacks by the Nazis in the Spanish civil war, Holland and London as innovative but practically amateurish. As the war continued and the bombing of Germany by the allies increased, focussing more and more on civilian targets, with better planes and better bombs, it became very professional and successful in destroying whole areas of cities and hundreds of thousands of civilians, not only the well-known case of Dresden, but Hamburg, Cologne, Frankfurt, Würzburg, and many others, especially in repeated raids during the last months of the war when the Germans had no fighters left to resist the bombers. Anyone who has not personally seen the devastation cannot comprehend it. (Surpassed only by Hiroshima.) By 1951 the streets had been cleared, but at the sides were mountains and mountains of rubble. The effect of all this was to unite the German people behind Hitler. There had been no enthusiasm in Germany for war in 1939, despite all the efforts of Hitler and his propaganda minister Göbbels, and no feeling of enmity towards England, though some for the arch-enemy France. But the bombing changed that: those who were mounting those awful attacks must be enemies- enemies to be resisted. How could one possibly want them to win? And that weakened the plotters- some could not bring themselves to “join the enemy”.

What is difficult for an outsider to understand is the strength of the feeling of honour, linked with the oath to serve, especially in the army. There were a surprising number of high-ranking officers who knew of the plotting- and some even agreed to take governmental positions afterwards if it succeeded- but who would not participate directly, because of the oath they had given. They felt that they could not do that- it would be dishonourable. And yet they did not betray the plotters either- most of them not even when tortured, later, when the assassination had failed. Also probably difficult for English readers to comprehend is the complete rejection of the Versailles treaty, by all, whatever their religious or political outlook. It was considered to be monstrously unjust, and they could not conceive of a post-war Germany which did not return to its pre-first war frontiers. Germany had territory taken by Poland, Czechoslovakia, France, Belgium and Denmark, and even Russia, and lost all its colonies. Austria-Hungary was dismembered, and it lost territory to Poland, Italy, and Romania, as well as in the “creation” of Czechoslovakia and Yugoslavia. Unconditional surrender was not a policy which was remotely acceptable to anyone in the opposition, and at all costs, the Russians had to be resisted to the end.

Hitler repeatedly escaped. He was almost killed in earlier attempts in which, owing to his unexpected departure from routine- decisions he always took personally and at the last moment- no assassination could finally be attempted, and only the plotters knew what happened. They were disheartened; fate really seemed to be on Hitler’s side. And then the debate began all over again. Was it right to kill the head of state, who was also the commander-in-chief of the armed forces? Do the ends justify the means?

Postscript (December 2007) Since the above review was written, newly released M15 files have shown that in 1942 and 1943 Count Helmuth von Moltke, a member of the German resistance, and who had remained in contact with friends in England, tried to arrange a meeting in Stockholm with the English political warfare executive. It was blocked by Churchill.