A biography by John Stubbs 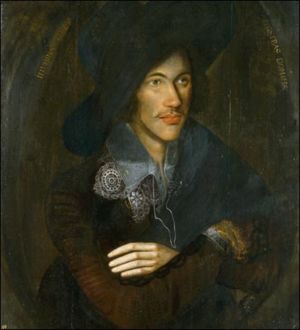 A portrait of Donne as a young man

Stubbs has researched not only Donne’s life but also Donne’s times. We get a detailed – occasionally too detailed!- historical perspective from which Donne the man gradually emerges and we follow his Catholic upbringing, his years at Oxford (but leaving before he was obliged to take the Oath of Allegiance)., his libertine years at the Inns of Court and the early outpourings of his satires and love poetry.

His star rising, he joins Essex on the expedition to Cadiz and sails with Ralegh to the Azores, returning to a Secretaryship with Elizabeth’s top law minister, Lord Egerton, Lord Keeper of the Seal. He is all set for a prestigious career at court or further afield when, fatefully, he falls in love with Anne More, the teenage niece of Egerton’s wife, marries her in secret and, according to his first biographer, jokingly but prophetically writes on the back of the kitchen door: John Donne, Anne Donne, Undone.

Some three months later, when the marriage is revealed, he is briefly in prison and then. for most of his life, out of a job. His efforts to remake himself professionally come to nothing and he relies on the bounty of patrons to provide for a devoted wife and a regularly increasing family.

The later poetry expresses Donne’s deep spiritual anguish. Stubbs is not a literary critic so there is no analysis of the poems but he helps us to see the poems in the context of Donne’s inner life: the sense of sin and the accompanying faith in redemption.

Did Donne have a religious vocation? Stubbs gives a balanced answer. Becoming a priest enabled him to take care of his family after his wife’s death but it was also a culmination of his studies in divinity and a continuation of his links with the Church. It was King James, however, who tipped the balance and is reported to have said: ‘Mr Donne is a learned man, has the abilities of a learned Divine and will prove a powerful Preacher. I will deny nothing for him.’ Donne eventually became Dean of St Paul’s and in the book we get a taste of his passionate preaching with its moral rigour, broad humanity and self-effacing humour.

The dust jacket of The Reformed Soul shows a youthful Donne in the romantic pose of the Lothian portrait, recently acquired by the National Portrait Gallery. The final chapter describes the making of the sculpture of Donne in his shroud, which one can see in St Paul’s Cathedral. The life between these two images was a journey of awakening, sustained by the constant reminder of death:

‘Was there ever any man seen to sleep in the cart between Newgate and Tyburn? Between the prison and the place of execution, does any man sleep? And we sleep all the way; from the womb to the grave we are never thoroughly awake but pass on with dreams and imaginations…’

For Donne, the awakening was to a new knowledge and a dispensing with the old: and not merely with book knowledge but with preaching, scripture, experience, observation, examples, comparisons – all that had propped up his life in the world – for these, he said, are ‘as nothing, altogether nothing, less than nothing, infinitely less than nothing to that which shall be the subject of my knowledge, for it is the knowledge of the glory of God.’ 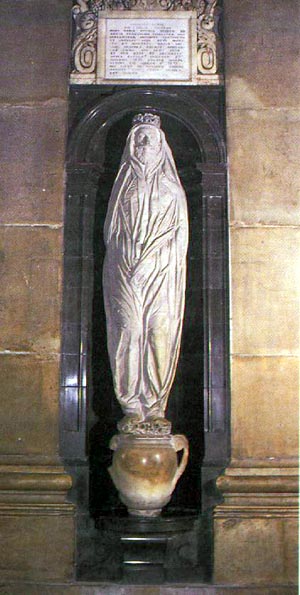 John Donne in his Shroud
by Nicholas Stone
In St. Paul’s Cathedral