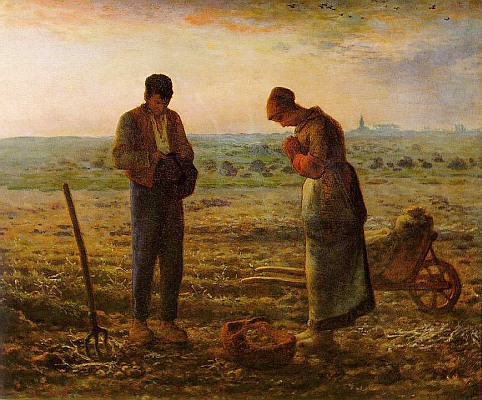 On the Feast day of The Assumption (15th August) 1950, the Angelus was broadcast for the first time on Radio Éireann at noon and 6.00 p.m. When Irish national television began in 1962, the ‘Angelus Bell’ was played from a tape, accompanied by old master paintings of the Annunciation, at 6.00 p.m.

RadioTelefísÉireann (RTÉ) is run by an authority appointed by the Irish Government. As a result there have been periodic debates, growing more intense in recent years, whether to continue to broadcast the Angelus. In an increasingly secular, multi-ethnic society, many deem it inappropriate that the state may be seen to support one religion and tradition over others.

There is deposited within me what I now realise to be an extraordinary impression taken in, in my youth. I was in a small mill playing amidst the bags of grain which were being carried in upon the shoulders of men for winter storage. The mill yard was filled with motor vehicles and horses and carts. Between buying and selling and the carriage of grain, there were some thirty people present. In those days the Angelus Bell was pulled by hand and sounded out from both the local village church and nearby convent at 6 a.m., 12 noon, and 6 p.m.

Although already autumn that particular day was warm, the sun shone and birds sang. At mid-day the bells began to toll and as I watched, one by one the workers stopped in their activity, those who had hats or caps upon their heads removed them, and each stood quietly. I can still now after all those years remember the silence evoked by being in such a company who found it quite natural to stop for a few minutes in the midst of their demanding outer efforts. There in play I felt the vibration of their stop and in a few brief doorway of moments, without any trying upon my part, something in me stopped and I had what I can now recall as a vibrant gentle sensing of my body, standing upright, my arms by my sides relaxed, contained within yet looking outward –a natural placement for peace. Then gradually the external world resumed its demand.

The Angelus is a short practice of devotion in memory of the Incarnation repeated three times each day. It consists in the triple repetition of the Hail Mary, to which in later periods were added three introductory versicles and a concluding versicle and prayer. The Angelus bears its names from the opening words, Angelus Domini nuntiavit Marie (The Angel of the Lord declared unto Mary). It is recited in Roman Catholic, Anglican and some Lutheran churches accompanied by the ringing of the Angelus Bell.

There is no single author of the Angelus unless its authorship is attributed to St Luke (Luke 1.26). With some confidence the origin of this Devotion can be traced back to at least the 12th century monastic custom of reciting three Hail Marys during the evening bell. Its institution occurred gradually over several centuries from that time. The version that it is in today did not take form until the early 17th century. The practice of the triple Angelus (morning to honour the Resurrection, the Passion at noon and the Incarnation in the evening) existed throughout most of Western Europe from the later half of the 15th century (a fourth or nocturnal Angelus after the office of Lauds was practised by the Carthusians). The thematic-theological construction of the Angelus is thus based upon the triad of Incarnation, Passion, and Resurrection. The Angelus in all its stages of development had a close relationship with the ringing of a bell, a triple stoke repeated three times with a pause between. This seems to have been practised from its beginning.

Also among other traditions and prayers, in a room at dawn in Cairo, by a twilight Temple in Madurai, one hears the voice, the gong, the bell emanating – calling towards an inner world- wordless, bathed in stillness, towards the life that offers our placement here upon earth, and although I never understood the words of the Angelus prayer, unbeknown to me its practice among the older generations transmitted a remembering of a vertical orientation through the spine of my back and feet, and the realisation that there are levels of listening.