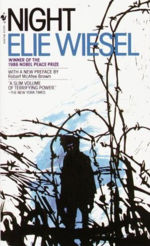 “They called him Moishe the Beadle, as if in his entire life he had never had a surname. He was the jack-of–all-trades in a Hasidic house of prayer, a shtibl. The Jews of Sighet—the little town in Transylvania where I spent my childhood—were fond of him.”

Thus opens this short, simple, moving book based on the early years of the author Elie Wiesel. He searches for a master who could help him in his studies of Kabbalah. Moishe the Beadle, the one who has mastered the art of rendering himself insignificant, takes the youth in hand and thus begins his initiation.

“AND THEN, one day …” the persecution of the Hungarian Jews begins and the youth with his family are hounded to Birkenau. There an SS officer commands, “Men to the left, Women to the right!” For the last time he sees his mother and three sisters, “walking further and further away”. He holds his father’s hand and somehow they survive Birkenau, Auschwitz, the forced winter marches; in Buchenwald (January 1945) his father finally succumbs. The relationship with his father during these terrible times is starkly, painfully, dare one say lovingly related, for here in these searing conditions all veils, and masks of pretence are torn asunder and all manner and levels of people emerge in forms both of humanity and bestiality.

He recalls the last night of Juliek, the boy from Warsaw: “I heard the sound of the violin. A violin, in a dark barrack, where the dead were piled on top of the living. Who was this madman who played the violin here, at the edge of his own grave…?

He was playing a fragment of a Beethoven concerto. Never before had I heard such a beautiful sound, in such silence…

The darkness enveloped us. All I could hear was the violin, and it was as if Juliek’s soul had become his bow. He was playing his life. His whole being was gliding over the strings. His unfulfilled hopes. His charred past, his extinguished future. He played that which he would never play again.” He asks how could he forget such a concert given before the dead and dying? Elie Wiesel was then aged sixteen.

This book deserves to be placed between Viktor Frankl’s Man’s Search for Meaning, and Primo Levi’s If This is A Man and The Truce.