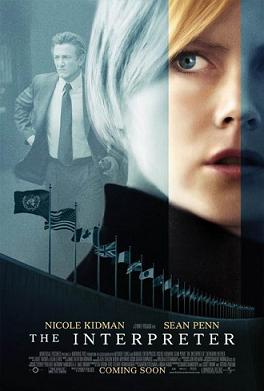 The unpredictable tone of this quietly engrossing thriller is set from the first few minutes. In a tense and shocking sequence, two white men are lured into a trap in the African country of Matobo and murdered by rifle-wielding children in a derelict sports stadium. A third man in their party, a photographer, escapes, having managed to take some pictures of the incident and its aftermath in which the orchestrator of the murders appears.

Nicole Kidman plays Sylvia Broom, an interpreter from the fictional African republic of Matobo working at the United Nations in New York. When she returns late to the congress building one night to collect some personal belongings, she accidentally overhears a whispered conversation in her native language which appears to be a plot to assassinate Matobo’s leader, President Edmond Zuwanie, within the UN Congress building. Zuwanie has planned to come to New York to deliver a speech outlining new democratic reforms in Matobo in a bid to prevent the UN from indicting him for ethnic cleansing and genocide. This man has become a reviled figure within his own country and across the world for his ruthlessness and cruelty, having begun his tenure as leader as a symbol of hope and change.

Once she has reported the incident, two Secret Service agents (the world-weary Tobin Keller played with great authenticity by Sean Penn, and his partner Dot Woods played by Catherine Keener) are assigned to investigate the potential plot and to protect Zuwanie during his stay in New York. Keller is initially highly sceptical of Broom’s story, but when a stalker wearing an African war mask is seen outside her flat, he has to protect her as well as investigate her background. Keller learns that the inscrutable Sylvia was once part of a guerrilla organisation that took up arms against Zuwanie’s government. Is she involved in the plot to kill him? In turn Keller is still coming to terms with the death of his estranged wife in a car crash.

All the main protagonists have been traumatised, and the film gradually and skillfully reveals what has happened to them, and their underlying motivations. Nicole Kidman gives an intense portrayal of an intelligent woman haunted by her past yet trying to live honourably. She vividly conveys a sense of being an outsider in a world where words have to be faithfully rendered in many languages but the intent behind them is never clear. Sean Penn matches his co-star, playing a character that is also bereft but still has a passion for life. The way in which the two main characters connect in spite of mutual suspicion is convincing and touching.

The tension mounts as the Secret Service find out that there is a ruthless killer in New York who begins to murder some of Zuwanie’s opponents. The sense of menace when Sylvia confronts one of these opponents on a bus is tangible. A few seconds after she gets off the bus, it is ripped apart by a bomb, and the political leader and his henchmen are killed, adding to our uncertainty over her role.

This was the first ever film to be allowed to shoot inside the main Congress building and the real-life locations lend an authenticity to the plot. The climax of the film links the early scenes of the film shot in Africa to Sylvia’s deep sense of loss and betrayal in a slightly implausible but exciting denouement. I found myself feeling sympathetic towards the two main characters, caught up in the machinations of international politics against their will. I would like to watch this again.