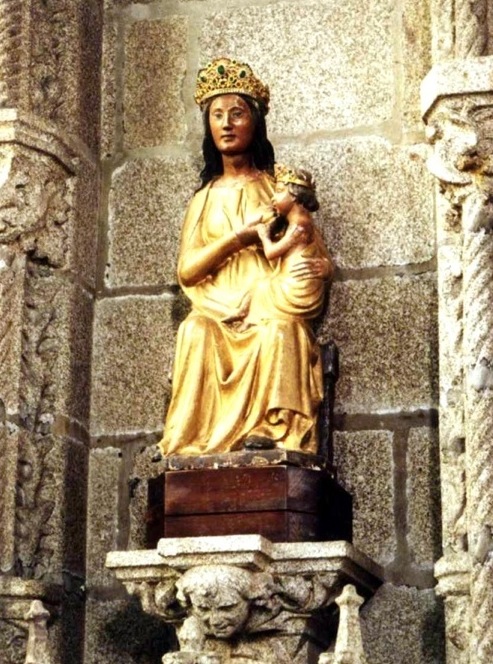 My first encounter with the Our Lady of the Marshes in the church of Saint-Sulpice in Fougères was deeply shocking. As soon as I stepped inside the building, and before I was consciously aware of being in her presence, I felt an inner jolt. I have often tried to express to myself in words what it was that so disturbed me but, as the experience went beyond words, no words can do it justice. I can say, however, that it was something to do with the contrast between the calm self-collectedness which she seemed to embody – fully involved in the Universe, but never losing herself in it – and the chaotic dispersion of my own thoughts and feelings. It was as though I felt a kind of rebuke emanating from her, a rebuke all the more painful for being entirely disinterested and impartial.

It is interesting to draw a comparison with a far more famous work, Bernini’s Ecstasy of St Teresa, which depicts the moment described by St Teresa of Avila in which her heart was pierced by an angel. Much has been said and written about Bernini’s depiction of the saint herself in her moment of ecstasy, but almost as striking to me is the contrast he draws between her turmoil and the angel’s detached playfulness. The angel’s expression seems almost callous, but this is only because, like Teresa, we are mortals, and therefore do not have his Heavenly perspective. So, at least, Bernini seems to think, and he is able to give his thoughts concrete expression with (to my inexpert eye) staggering technical virtuosity. 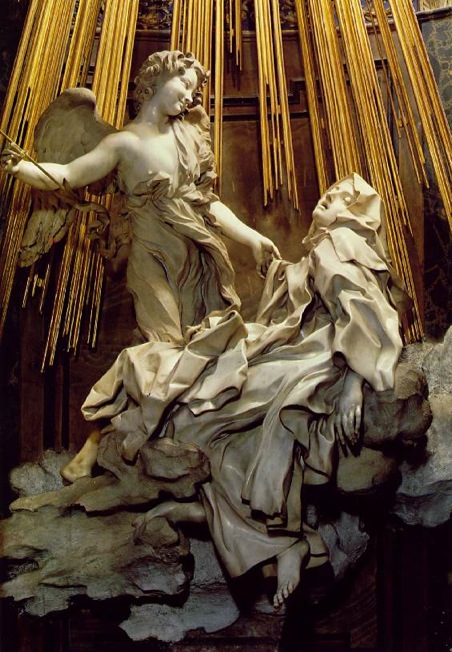 But for Bernini, the understanding he seeks to express remains in the realm of ideas; it has not entered into his flesh and become part of him, so that, for all his skill and passion, what he communicates cannot become part of us. Whoever created the Virgin of the Marshes*, on the other hand, had got beyond ideas. The understanding he put into his work was as truly his own as his heart and lungs. Accordingly, it can – to the degree that we are able to receive it – go straight to what is most real in each of us, bypassing our own ‘realm of ideas’ – all those beliefs, tastes and preconceptions which we identify with ourselves.

*The granite statue of Our Lady was found in the marshes near Fougères in Brittany in the thirteenth century.

We wish to thank the Tourist Information Office in Fougères for sending the image at the top of the page.