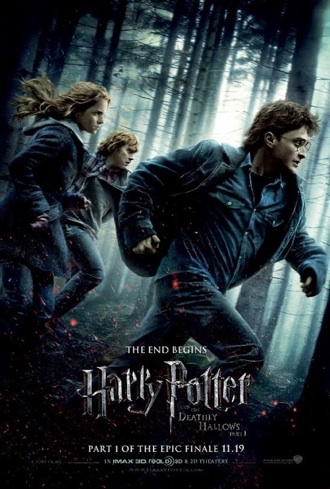 My grandson and I are in extraordinary agreement about this film. It is better than the previous very disappointing films made from these books (though Harry Potter and the Prisoner of Azkaban was quite good), and the acting was better than the script or direction. We accepted that, even turning the last book into two films, it was still necessary to simplify the plot. But despite the fact that the final book appeared a few years ago (see the review in this magazine http://www.in-between.org.uk/books/harry-potter-and-the-deathly-hallows/ ), the director is still treating it like a child’s sci-fi jaunt, and continues to be tempted into pointless technical cleverness rather than to build up atmosphere.

Things are not helped by a Voldemort who seems quite human, rather like a baddy from a James Bond film, looking like Ralph Fiennes with cosmetic surgery gone wrong. This is not the face of a man who has divided his soul into seven and has “red slit eyes”, and who– unlike Hitler, for example- lacks all human feeling. Bellatrix (a much-praised performance) is played like an insane woman, not the totally committed, devoted, fanatical follower that she is. And is Daniel Radcliffe any longer up to playing Harry, my grandson wondered. For Harry is no ordinary boy, but someone fated to fulfil a unique task- in fact, to be a real hero, like an Arthurian knight on a particularly dangerous quest.

One odd change- the Minister of Magic has been changed into a sympathetic ally- was this because a Labourite scriptwriter couldn’t bear to leave him to be so like a minister in the last government?

Amongst rather many disappointments, two seem inexcusable. The appearance of the silver doe patronus, quite lacks mystery, and it isn’t recognisable as a doe-though in the book perfectly clear to Harry. And then the sword of Gryffindor looks like an enlarged letter-opener, not a marvellous sword with unique magical powers. Where were the gleaming red rubies?

What is the point of these films, since they are incomprehensible to anyone who does not know the books really well? Why do we go to see them? Why did I go? Yes, I wanted to be reminded of this amazing story, and to see whether its spirit could be expressed in film. I hope that one day they will all be made again.

Currently showing in cinemas in England