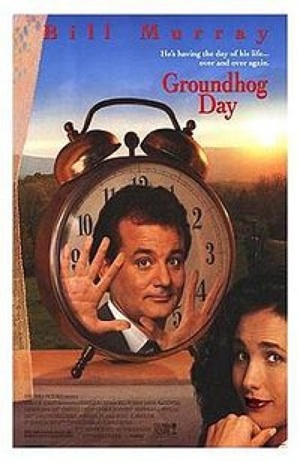 This is one of my favourite modern comedies. Bill Murray plays an egotistical, acerbic TV weatherman called Phil Connors, who travels to Punxsutawney, Pennsylvania to make a report on the annual February 2nd Groundhog Day festivities (the day when traditionally the Groundhog wakes from hibernation, signifying the start of Spring). He is accompanied by his long-suffering producer Rita (played by Andie MacDowell) and cameraman Larry (Chris Elliott).

After completing the report (and after Phil has tested the patience of everyone concerned to breaking point), the team tries to return to their base in Pittsburgh but is forced to turn back when a blizzard blocks all the main roads. The main thread of the plot then becomes apparent.

When Phil wakes up the next morning, he discovers that he is living February 2nd again, although he can remember the events of yesterday’s February 2nd. Initially Phil doesn’t believe what has happened, but after February 2nd repeats a second time he begins to exploit his foreknowledge of events for his own gain. The novelty of the situation wears off, and Phil becomes more and more depressed as he realises that he’s trapped seemingly forever in the same day. Eventually, he reaches such a low point that he commits suicide by driving off a cliff with Punxsutawney’s resident Groundhog, only to find that he still wakes up on the morning of February 2nd.

At this point, he confesses his situation to Rita, and she encourages him to use the situation to better himself. He starts to try to help the people in the town, even attempting desperately to save the life of an old tramp who he knows is going to die. Gradually, Phil warms to other people and their difficulties, and reveals a completely different side. It is only when his love for Rita is finally reciprocated that Phil finds he has moved on to February 3rd and his life resumes, but in a totally different direction.

Bill Murray perfectly captures the journey of his character from an irritable, self-centred egotist to a warmer, more open individual who embraces life, but not in a sentimental way. There are many funny moments, and also some unexpectedly poignant ones. The same events of February 2nd are shot from many different angles so the viewer shares in how Phil begins to view the same day differently. The film raised a question for me about what in us can face each day in a new way? Do we not usually face the day in exactly the same way? 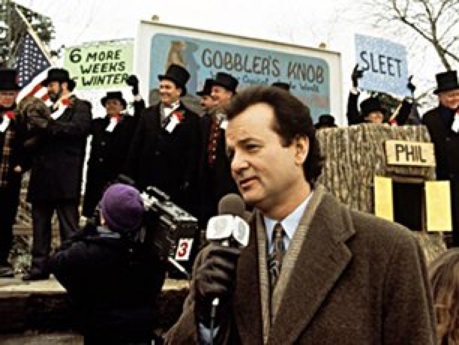