An exhibition of paintings, drawings and prints by Cecil Collins (1908-1989)

In the early 1960’s I enrolled as an art student at the Central School, and in the Fine Art course found myself with Cecil Collins as my tutor. His exhibition today is in that same building.

Its hard now to picture that time of turbulence in the world of painting. “Pop art” was everywhere, and conceptual art was just beginning – you were supposed to smack the public in the face to win approval, it seemed. In one of the other large rooms in the fine art department you would hear the students in the year above us sticking or peeling off masking tape as they worked intensely on “hard edge” paintings.

By contrast in our studio there was often either a deep ponderous silence or a scrubbing sound as paint was brushed onto canvas at various speeds. This was generated by human energy. Some of Mr. Collins’ students rebelled immediately and left his domain. Those of us who remained took an unfashionable but rewarding path.

Each day in the studio we started with some kind of “attuning” or warm-up exercises, perhaps shutting our eyes, perhaps hearing great music and connecting with the creative energy by moving our arms and bodies, or practicing making different kinds of marks with charcoal, reed pen, or brush and ink, differentiating the marks by their speed and energy, and whether just the fingers, the forearm or the whole body made the stroke. Or it might be a lesson related to colour – all the traditional painters’ pigments (not the abstract idea of a complete spectrum) have a value which may be “major”, “minor”, or “bridge”, and combine in different and surprising ways.

I really began to appreciate great art as not merely realistically rendered intellectual ideas, but how real images arise from a process that started by making a field filled with life – he called it making a “matrix”, then spontaneously finding the images or allowing them to develop within it, guided by a sensitive eye and hand, so each stroke came from within and carried a flow of energy as personal as handwriting, as universal as calligraphy. This proceeded whether working from life or composing “from imagination”.

Sometimes having started with exercises, when we opened our eyes he would show us a painting with qualities that he felt would inspire us. In this way I learned to look closely without labelling, and to this day appreciate Rembrandt, Goya, Paul Klee, Ucello, Odilon Redon, Constable, the drawings of Gaudier-Breska, Picasso, Rodin and so many others who worked not from the intellect alone but more completely from themselves and have used their skills to relate their inner world to what they could observe outwardly. He also touched on traditional stories, archetypal figures and dreamed images found within all human beings which he defined as “fool”, “angel”, “king”, “moon”, “tree”, “water”, “mountain”, “ship”, “child”, “castle” and so on.

Some of his paintings have impersonal faces with graceful expressions or barely suggested shady figures representing energies or forces.

Many paintings look as though he could have continued, but he left them still filled with life and possibility, for example “The Guardian of the Paradise”.

Most of the paintings on display are relatively small, and while one can see that a lot of work has taken place, the final image may be quite simple, and even reduced to one colour, such as “Blue Angel” worked with the most vivid ultramarine.

“The Great Happiness” is a lithograph which speaks of levels and of yearning, a vertical rectangle with sun-like orb within a sky near the top and layers of calm, dense or agitated landscape below. I remember him suggesting that we are born into the small happiness which is soon spoiled for most of us, and we live in the small unhappiness, full of irritation and nostalgia. If we are searching for something of a larger dimension than our ordinary life we may enter the world of great unhappiness, but beyond that is the great happiness which we may occasionally glimpse, that brings hope. He said that Mozart had still kept contact with the innocent happiness of childhood which gave him the inspiration for much of the charm in his musical compositions, while composers such as Ravel or Chopin hovered in the greater unhappiness, and Bach and Beethoven’s major works entered the upper areas closer to the great happiness, where Palestrina might also be found.

Because of his influence 47 years ago a lifelong journey of discovery “took route” in me, and looking at the paintings assembled in this show I was deeply touched once again by the flavour of something new which I tasted so vividly then. 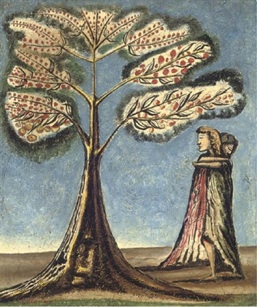 An evening of music, poetry and movement in honour of Cecil Collins