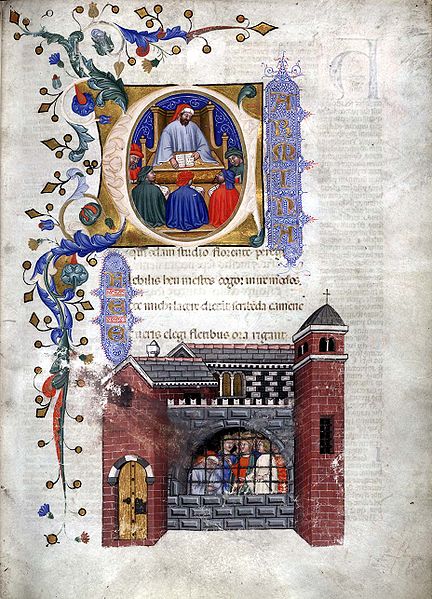 Please do not make the same mistake that I did and assume that this is a dry, intellectual book. Having received this as a gift it took me several years to overcome my prejudice and read it. Boethius was born into a noble Christian Roman family around 480 AD. His father had served as the consul to King Odoacer and after he died, Boethius was brought up by Quintus Symmachus, the consul and later Prefect of Rome. He was highly educated, and became quickly recognised for his wisdom, being appointed Consul of Rome by King Theodoric at the age of thirty. He was an exceptionally capable linguist and translated some of Aristotle’s works on logic from Greek into Latin.

Boethius was caught up in the political machinations of a schism between the rule of the King of the Western part of the Roman Empire (Theodoric) and the Eastern part, ruled by the Emperor from Constantinople. This resulted in him being implicated as plotting against King Theodoric, leading to his properties being confiscated and subsequent imprisonment in exile.

The Consolation of Philosophy was written under conditions of enormous duress in prison during the period leading up to Boethius’s torture and subsequent execution. The “Philosophy” of the title is in fact a muse, or divine spirit, who returns to the author to persuade him using logic and reason that what he believes is reality – that God has no power over men, that evil triumphs over good , is actually not the case, and that real happiness is to be found inside man rather than from external strivings:-

“Whoever deeply searches out the truth
And will not be deceived by paths untrue,
Shall turn unto himself his inward gaze,
Shall bring his wandering thoughts in circle home
And teach his heart that what it seeks abroad
It holds in its own treasure chests within.”

What is this “inward gaze”? The muse Philosophy gently remonstrates with Boethius that he has forgotten his true nature and shows him how to return to this deeper or higher nature. Whilst some allowance has to be made for errors in translation, the clarity of the language is astonishing , with clear references to different levels of understanding within Man. For example – “Everything that is known is comprehended not according to its own nature, but according to the ability to know of those who do the knowing……Similarly man himself is beheld in different ways by sense-perception, imagination, reason and intelligence.” The latter word in this context means understanding. There is also a stark reference to the idea that higher knowledge includes lower levels of knowledge but that the reverse is not possible. Lower knowledge cannot understand higher knowledge.

The later chapters of the book touch on many themes, including the meaning of Fate and Providence, the Wheel of Fortune and how these can be reconciled with “Free Will” and the idea that God is an eternal presence. The tone of the book is unusual because it does not use explicitly Christian language in a commanding way, but rather recognises the need for individual search. There is a beautiful description of God as “the author of all natures”. It seems to me that these ideas are symbolic of Boethius’s inner struggle to come to terms with his situation and to find within himself something which could face these circumstances with some degree of equanimity. Parallels are made between Boethius’s circumstances – of literally being in prison and man’s habitual inner state of imprisonment from his conditioning and the fragmentation of his functions.

I am left with a sense of how closely we are connected with what ostensibly seems to be ancient history. Boethius lived over 1500 years ago and yet his words could have been written yesterday. The Consolation was widely translated across Europe for over a thousand years and exerted an enormous influence over medieval writers, including Chaucer. This particular edition is further enhanced by beautiful reproductions of paintings from a fifteenth century translation by Jean de Meung and a Preface written by Brian Keenan, who was one of several British hostages imprisoned and tortured for several years by gunmen in Beirut. His poignant views of The Consolation of Philosophy reinforce that sense of connection with the past, and illustrate that the human condition and our possibilities have not changed.

The Consolation of Philosophy, Translated by V.E.Watts, Published by The Folio Society, 1998 (Hardback). $44.95. 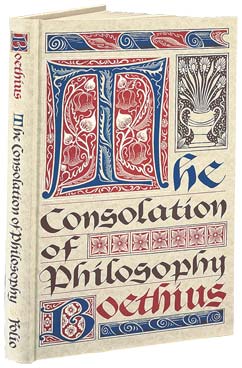