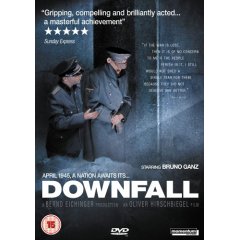 Based on a first-hand account by Hitler’s secretary, and a book by Germany’s foremost post-war historian (Joachim Fest), this film depicts the last days in Hitler’s bunker in Berlin. Above ground, the dreaded Russians are closing in on the collapsing city amid scenes of death, destruction, heroism and madness. Most of the famous villains appear, Goebbels most vividly, in a chillingly convincing portrayal, and his even more chilling wife. The film ends with Hitler’s secretary, now an old woman, trying to question, and wondering why she did not do so at the time. In fact, those who spent years in the bunker with Hitler had contact with the outside world only through the radio and military communiqués and the occasional visits of Ministers, and officers fighting in defence of the city.

We see Hitler eating his last vegetarian meal and drinking water in the non-smoking dining-room and complimenting the chef, and later, as more and more of his colleagues chain-smoke and take to the bottle, quietly saying good-bye to each of his personal staff before retiring to blow his brains out. Shortly before he had ranted about being betrayed by his closest colleagues and the incompetence of his generals, and shown a total absence of feeling for the suffering of the Germans and the citizens of Berlin.

Identification leads many of us to the borders of madness, and some are drawn further. But fanaticism? The crystallisation of extreme lopsidedness, one might cleverly call it….. but can we understand it?

A companion documentary film to Downfall (2004) is Blind Spot (2002) a record of interviews with Traudl Junge who as a 22 year old was chosen from a clerical pool to be one of Hitler’s private secretaries. Working daily with Hitler she viewed him as polite, and private, and nothing like the strutting mesmerising rhetorician of his public speeches. Shielded from the knowledge of Hitler’s atrocities she was, rather than being the centre of information, actually in a blind spot. She was however a witness to his accelerated degeneration into madness and the chaotic last weeks in the bunker in Berlin. A striking contrast to these two films is Leni Riefenstahl’s Triumph of The Will (1935), in so many ways a fearsome and extraordinary documentary, a record of political propaganda cloaked in striking images to evoke ‘religious’ fervour. It is difficult now to comprehend that it was but ten years from the release of this movie about the 1934 Nazi Rally at Nuremburg to the final horrors and suffering in April 1945. Can any mortal really understand what happened in between and why?