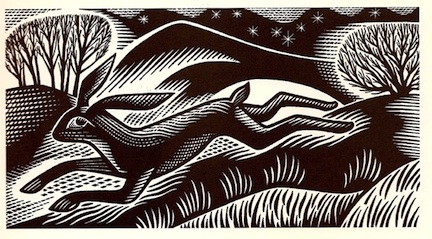 No one but I went there-or so I thought-for it is out of the way, hidden. And since my childhood, when I first felt a certain awe gazing up at its old gnarled trees, it has been a beckoning towards another world.

Certain rules, ancient ones it seems, applied to how one conducted oneself within its mounded, ringed enclosure. You did not enter there after dark. You took nothing from the place, be it a fallen branch from a tree, beautiful wild flower, or ripe blackberry. Should a cow wander in, she was allowed to remain until the time came for her to re-emerge of her own accord.

Is it not so that a child’s first glimpse of the spiritual comes through the supernatural? Sometimes, after I was supposed to be asleep in bed, I would go to the south-facing window, and gaze across the fields at its dark wooded outline, and imagine the people who it was said lived within its enclosure. I often felt drawn, experiencing both fear and fascination, to leave the safety of the known, warm family house and go towards its daunting unknown.

I believed that these other people – the Sidhe – existed. They were real. Some called them fairies but for me they were not so. They were something other who were always present, but they did not belong to Victorian or Edwardian imagery and certainly not to the fantasy of Hollywood. Something in me understood what I ordinarily could not understand, and I often became lonesome and almost desperate in my wish to see and hear them.

I had heard from the old woman upon whose land the place was situated that if I could be very quiet I would hear the hum of starlight. This attempt at listening became a form of childhood play, like the play of climbing trees, catching fish with my hands, stalking ‘wild’ animals, sitting for long periods among the collectives of cattle, seeking to communicate with the manifestations of nature. Even as an adult, I would sometimes roll out my sleeping bag and lie down there amidst the hawthorns, alder and gorse, observe the full, silent rise of the moon, and try to listen to the breath of the stars.

I return sometimes when I pass that way and still experience the gentle wonder that often seemed to become stronger when I sat there amidst the round of the years. Nothing to do; just sit and observe the rain, dewdrop, swift wave of sunshine, soughing wind, rainbows and thundering clouds.

Some fifty years after I was first brought to the Lís, I met a traveling artist in London. As she related to me the story of her childhood place, the realisation of what we shared washed over us and we laughed, as free children laugh amid their living, wonderful secrets.

Drawing of a magical hare by Clifford Harper