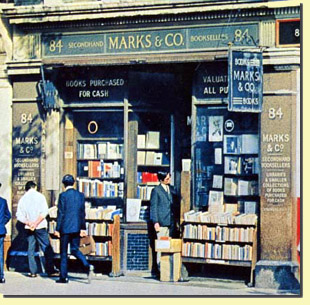 The book of the same name by Helene Hanff is based on her correspondence with a second hand and antiquarian booksellers, Marks and Co., over a period of 20 years. She starts by ordering copies of literary classics, unavailable in New York and delights in the physical feel of the old editions she receives, the bindings in cloth or leather, fitting vehicles for the thoughts of their authors that are alive for her. As she orders more books so her relationship with the booksellers themselves also grows. The film includes some memorable vignettes of life in London and New York during the 50s and 60s-a period before the paperback revolution when stately homes were selling off their libraries and second hand book dealing flourished in the Charing Cross Road

The significance of the film for me is the touching way it illustrates how threads of relationship can be so meaningful and significant in our lives even without meeting face to face. By the time Helene Hanff had enough money to travel to London, her chief correspondent, Frank Doel, had died. There is a poignant moment at the end of the film when Helen Hanff, (played by Anne Bancroft) at last arrives in London and enters the shop, now up for sale and denuded of its stock; time has passed, she is too late, or is she? She becomes aware of all that the relationship has meant to her.

84 Charing Cross Road in the mid Sixties. It is now a wine bar