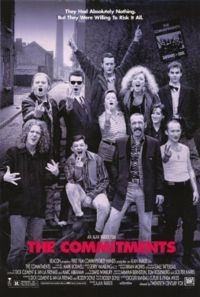 Originally released in 1991, and directed by Alan Parker (whose previous work includes Bugsy Malone and Midnight Express), this effervescent film tells the story of the attempts by a teenager called Jimmy Rabbitte who is inspired by the likes of Wilson Pickett, James Brown and Otis Redding to form an Irish soul band in the poor part of Dublin. The film charts the history of the band, starting with the hilarious early auditions – where a wide range of hopelessly optimistic characters, including spoon players try to join.

Slowly, key members of the band are recruited – the bass player, drummer, and saxophonist. Then Jimmy discovers a young singer called Decco (performing when very drunk at a wedding reception) who in spite of his youth manages to sing like a wizened soul man and a mysterious veteran trumpet player called Joey “the Lips” Fagan. With the finding of three singing girls from his schooldays, Jimmy has the basis of The Commitments, who he starts to sell as “the hardest working band in Dublin”.

The film progresses to show the rehearsals, and Jimmy’s tribulations over hiring a PA system and finding a suitable venue for the band’s first gig. Interwoven with the music are subtle but expertly realised glimpses of some of the key members of the band going through adolescent stages of lustful yearnings, and a dawning realisation of how they are being influenced by their music. The growing tensions between the band also become more evident. Decco wants to be treated as the “star”, and regularly berates the rest of the band, especially the drummer.

The climax of the film is The Commitments’ final gig. Their reputation has spread very quickly, and Jimmy Rabbitte hears that Wilson Pickett himself is in town and may come along to hear the band. After a sensational performance, the band vent their frustration on Jimmy because Wilson Pickett does not show up, and amidst a number of rows, the band disintegrates. To add insult to injury, as Jimmy walks disconsolately away, Wilson Pickett’s car drives up to him and asks him the way to the gig, two hours later than planned.

This may sound like a downbeat ending, but the mere fact of playing in the band for a short while changes all the band members’ lives forever. No other film I’ve seen comes close to this one for capturing the sheer coruscating exuberance and energy of a young band forming and learning to play together. The music of the band is irresistible in it’s drive, rhythm and joy. Many of the performers are exceptionally talented, not least Andrew Strong who was 16 when he was auditioned for the role of Decco. The film rattles along at a breathless pace and effortlessly evokes the trials and tribulations of adolescence, not least in the way in which people come together for a short time then move away again.

Alan Parker wrote afterwards that this was the only film he’s worked on where he looked forward to going to work every day and it shows. Most of the actors were untrained, but give astonishingly convincing and funny performances. The film shows enormous warmth for it’s characters, who are depicted with a gritty realism and earthiness. The film does not flinch from the colourful language and elements of violence that occasionally flare up.

So if you want to be inspired by playing in a band, look no further, and try to listen to “Mustang Sally” without wanting to tap your feet and sing.

As an aside the main actor (Glen Hansard) in the film Once also played a strong part in The Commitments as the guitarist Outspan Foster. The film was an important, even pivotal, effort in the history of the Irish film industry and showed a Dublin vibrant in its music even in an economic depression rather than the usual sentimental blarney films aimed at the Irish American market.

The film is based on a book of the same name by Roddy Doyle.