This is a supplement to the article, Discovering Black Club 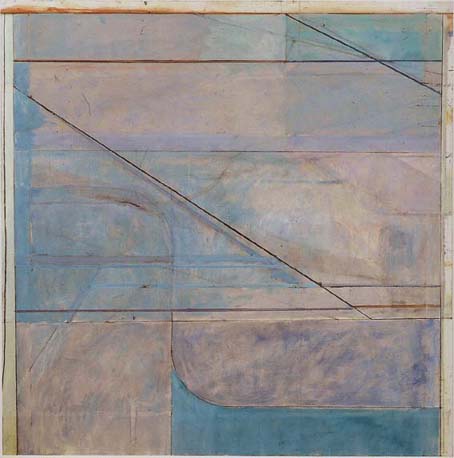 While inspired by the land, sea and sky of California, such paintings are not about the outer landscape, but represent an interior world, an inner place – Diebenkorn once said that in a way a painting is only complete when it is ‘a kind of world’. As such they are a search for ‘right relationship’ – a dynamic balance between qualities such as warm and cool, light and dark, above and below, different degrees of density, and so on.

Like other forms of abstraction, such as geometry and music, such paintings explore the fundamental principles that lie behind the surface appearance of things – what is the nature of division and separation? what is unity? what is transformation?

Diebenkorn’s paintings emerge through struggle. This can be seen through the process of statement, revision, adjustment and layering through which the composition has been developed. It is about transition, and the process of becoming that underlies and informs the ‘final’ image; it also has an openness that invites the viewer to share in this process. It is a questioning of the very act of painting, that includes not just the materials, technique and composition, or even the perceptual process, but a question about where it comes from.

The painter puts himself in question as sincerely and as critically as he can and searches for something that sits rightly within himself. He made a number of interesting statements in this regard, “I seem to have to do it elaborately wrong and with many conceits first. Then maybe I can attack my pomposity and arrive at something straight and simple.”

He stated that he was particularly interested in, “the interweaving of emotions, and the wonderful fabric that can result if one of them isn’t squawking”. He also affirmed that, “Part of painting is physical. Another part is intellectual. The most highly praised aspect is intuitive, when it is operative….There should be a balance”. It is interesting to note that he makes no claim that the intuitive is a given, rather, the implication is that it has to be worked for.

Paul Valery, speaking of Degas, said something that could be applied equally to Diebenkorn, “I admire such rigour. There are people who cannot feel they have acted, accomplished anything, unless it be in spite of themselves. That perhaps is the secret of real virtue”. Valery described Degas as being, “like a writer striving to attain the utmost precision of form, drafting and re-drafting, cancelling, advancing by endless recapitulation, never admitting that it has reached its final stage: from sheet to sheet, copy to copy, he continually revises his drawing, deepening, tightening, closing it up.”

The abstract painter Peter Lanyon was driving at a similar idea when he said, “…it is necessary to go beyond the immediate gesture. As soon as this is done the artist enters a human condition. To transcend this is to achieve an act of commitment and choice and eventually an arrival of consciousness” and also Graham Sutherland, “I don’t always understand what I am doing – or what I am likely to do. You might say that at this stage I am hemmed in and compressed – even thwarted. My mind is receptive – but vacant….Gradually an idea emerges: there is the knowledge that, almost in spite of myself – something significant has arrived”

So it is as if painting, for Diebenkorn, embraced a natural state of affairs – one of error, and inadequacy, and constituted a process of re-orientation. ‘Black Club’ and similar works produced in the early nineteen eighties were an unexpected interlude in Diebenkorn’s Ocean Park series. This corresponds to the four year period of his mother’s final illness, when, unable to work on the larger paintings, he found himself returning to the heraldic images he had been fascinated by from the tales of chivalry his grandmother had exposed him to, as well as the talismanic playing card symbols of clubs and spades.

Diebenkorn had visited Malta in 1980 as a result of his interest in the Knights of Malta. He had also collected Indian miniature paintings. In his final years Yeat’s poetry, particularly “Sailing to Byzantium”, was particularly close to his heart. “Untitled” below (1987, 24” x 19”, pasted paper and acrylic on paper) was amongst the final pieces he produced. 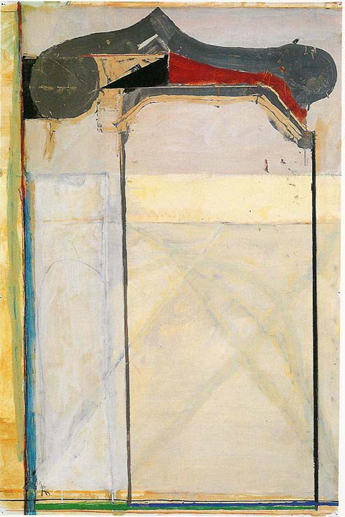 LINK: www.ashleywest.co.uk to view paintings related to the work of Diebenkorn