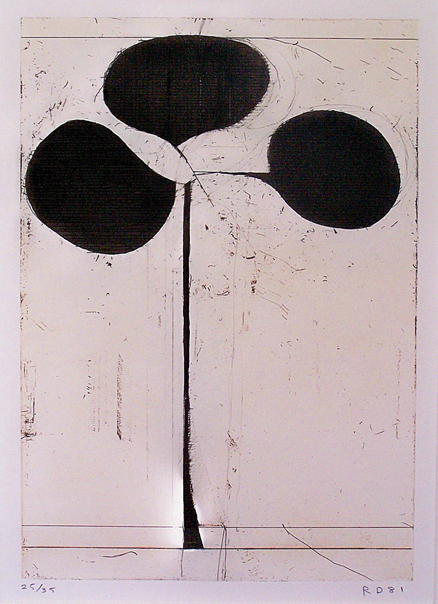 My wife and I were on a trip to San Francisco just after we were married. Walking into a small private gallery just around the corner from the Museum of Modern Art, we unexpectedly came across this etching.

It hung in a quiet space at the back of the gallery and was presented with great care in a large ivory mount and silver frame. We found ourselves standing in front of the piece and saying very little for some time. It was very simple, modest in scale (with an image size of 34 x 24cm), a single motif in black and white, yet it seemed to speak from the heart and to the heart. In those few moments it seemed as if it was possible, on some level, to assimilate directly the various aspects of its proportions, composition, and symbolism – in such a way that it was as if one was being nourished by something that one had forgotten.

The etching was called ‘Black Club’, and it was by the American artist Richard Diebenkorn. It has been sitting on our wall for six years now. I glance at it now and again – sometimes for longer than just a moment – but has it enriched my life as I envisaged?. It is as if it is sufficient to know that it is there, and that at some point (but not now) I will take some time to look at it more closely. There is a tendency to assume that even though I neglect to pay it any real attention, it is still there, as I originally experienced it, intact and constant.

But is this true? What do I find if I try to give something a little more attention? First of all I notice that it isn’t easy. I am not used to really pausing – it goes against the grain of my usual momentum in which I tend to pass things by. As I try to persist a little, to stay in front of this image, I notice various associations. I am reminded of the tree of life, a sprig of clover, the trefoil of a church window, inflated alveoli and so on. These are very potent poetic images, but where do they lead?

I remember someone once saying something to the effect that, ”It is not what a thing is, but what it engenders”. After a while I am brought back to the physical reality of the image: the grain of the paper and the ink, the marks made by the tools used, and to the specific characteristics of the image: the subtle difference in the shape of each lobe, the way the white space gathers into four negative shapes that nestle together in the centre, the deviation of the right hand side of the base of the stalk, the way the form stretches between a lower and upper limit, and the faint suggestion of a path leading to a distant horizon.

Discussing the image with my wife Anne, she said that the darkness of the image reminded her of the crack in the curtains behind the altar, in the chapel where she sat, trying to reconcile herself to the dismay of breaking a treasured bowl with hand painted lemons, as she rushed for the bus to work at the hospital. Later, as dawn broke, she was struck by the rising sun that appeared transfigured, like a lemon in the bowl of the sky. Above all the image she is left with however, from Black Club, is of an angel in rapture as the suffering of the void is embraced.

As one continues to search, it is as if such descriptions, while becoming more subtle, begin to give way to the elusive thing of which they speak. Even the material substance and visual form of the image seems to give way. From the state of distraction one is faced with in the beginning, something begins to settle and a different sensitivity arises. I am brought back not only to what is in front of me, but also to myself observing it, and to something behind both.

What this seems to show is that the substance, meaning and reality of anything, and indeed its potential to nourish me, seems to be relative and proportionate to my willingness and ability to give attention to it. As that which is on the surface gives way, what is seen? It may be something of a lesser quality than I imagined. On the other hand I may discern a deeper source that it emerged from. Either way, my attention and discernment have been exercised, something has been revealed, and I have been nourished.

NOTE: Further reading related to the process of observing works of art may be found in the essay ‘Between Form and the Indefinable’ by Christian Heck, from Gurdjieff, Essays and Reflections on the Man and His Teaching, edited by Jacob Needleman and George Baker, Continuum 2004.