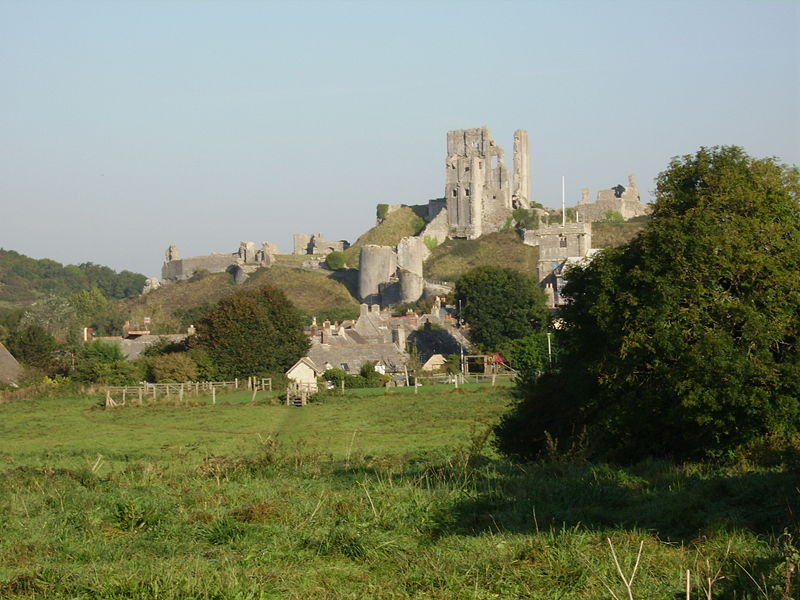 All of us have “special” physical places where we feel more at home and find it easier to relax and reflect. One such area for our family is the Isle of Purbeck in Dorset. An Isle that is not island, this is a small peninsula west of Poole Harbour that embraces rolling hills, sandy beaches, rugged sea cliffs, some of the oldest rocks in the world (Lulworth Cove is famous for fossils), and an almost totally unspoilt (and protected) coastline which is now a World Heritage Site. I have so many happy memories of the area stretching back to my childhood that every time I return, I feel as though I’m being supported by an old but ever youthful friend.

It’s not only the natural beauty of the area that draws me back. There is a palpable sense of man’s connection with the landscape here. Many epochs in man’s development are visible. The Neolithic burial chambers on the aptly named Nine Barrow Down to the medieval Corfe Castle, the Swanage steam railway which runs from Corfe Castle to Swanage (the melodious whistling of the engines echoes round the valley all day in the summer months) and the Purbeck stone quarries still in use today which produced much of the stone and marble for Salisbury Cathedral.

We’ve often camped at Downshay Farm adjacent to the railway, which is set on a hillside overlooking the majestic ruin of Corfe Castle that fills a natural gap in the Purbeck Hills. The camp site is basic, consisting of two fields with simple washing facilities. The children have acres of space to play in and explore safely. I will always treasure the impression of my two older sons running and skipping with delight in the fields back to our little tent to cook supper outside on a warm summer evening whilst watching the swallows swoop and dive over the grass with the sun going down behind the castle.

There are many footpaths and cycle trails in the area. One of our particular favourites starts from a small village called Worth Matravers from an unspoilt pub called the Square and Compass. This has been run by the same family for over 100 years, with spectacular views down to the cliffs of St.Aldhelm’s Head and the sea. The remains of Neolithic farming terraces on the surrounding hillsides are clearly visible from here. There is an easy track that winds through the village and then down to St. Aldhelm’s Head – the southern-most point of the Isle of Purbeck. Just before the path ends above 300 foot cliffs, the walker is confronted by a tiny square Norman Chapel – the Chapel of St.Aldhelm. Measuring barely thirty feet square, the simple stone building has only one tiny window facing East which has recently had some beautiful stained glass installed. It’s unclear who built the chapel, although the grave of a Norman woman, possibly a prioress was found nearby in the last century. The atmosphere there is peaceful, surrounded on three sides by the sea crashing on the rocks far below and walking here seems to take the traveller back in time. 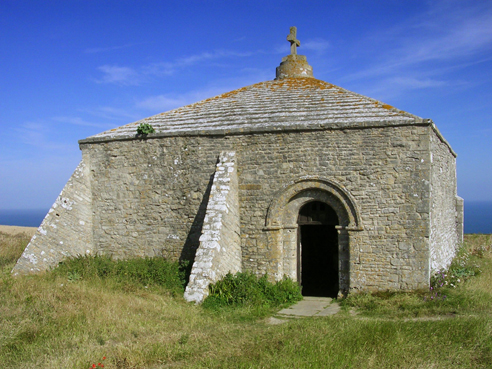 The cliffs at St. Anselm’s Head and the beach at Studland Bay

Shortly after our first child was born we rented a cottage on top of the Purbeck Hills above Studland Bay. It was early in May and we spent many hours tramping over the hills, including a splendid walk down to Old Harry’s rocks – enormous chalk arches carved by the sea over millennia with our two month old son Sam dangling and mostly sleeping in a baby rucksack. During this stay, I will never forget being in the cottage whilst a large storm broke around us. Lightning struck the ground all round the cottage and the electricity was cut – an awesome demonstration of nature’s power.

There are many small roads which simply cry out to be explored, and one is never certain what is round the next corner – perhaps a stonemason’s workshop, or another hidden campsite, an animal sanctuary, or another unspoilt pub. Perhaps this is a guilty pleasure on my part but I’ve always had an affinity for steam engines, and whenever we stay here, we always try to go on the train from Harmann’s Cross to Corfe Castle. The stations have been painstakingly restored to reflect the 1930s era, and the sight, sound and smell of the engines pulling into the station is something I never tire of. The elemental nature of these machines – water, air, earth (or rather coal) and fire exerts a strong attraction for many people, long after they were replaced by diesel and electric propulsion.

But it is to Studland Beach that we return most often throughout the year. It’s a wide sweeping bay of sand, with shallow, calm water – perfect for young children to play and swim. Parts of the beach become very crowded in the summer, but the rockier section closer to the boats is still quiet because it needs a longer walk to get there. We’ve sometimes arrived at the beach at eight o’clock in the evening in summer and stayed until after ten – swimming in the warm blue water. Just behind the beach, hidden amongst trees, an ancient church with unusual stone carvings of caricature faces around the edge of the roof confronts visitors with an invitation to sit and ponder.

After one camping trip with some close friends, Sam asked if we could stay here forever. The Isle of Purbeck is one of those places of the heart.