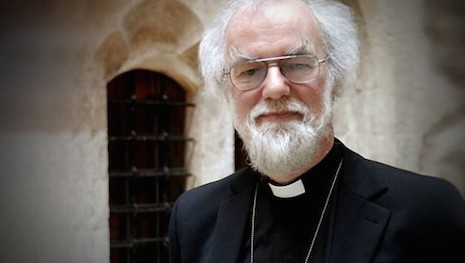 The Christianity I was originally formed in was not very ritual-minded: it was both intellectually alert and emotionally intense – the best of a style of Welsh Nonconformity now almost extinct – but tended to look down on physical expression of belief (other than singing, which I suspect was regarded as not really physical). Only when the family joined the Anglican Church when I was in my early teens, after we’d moved to another town, did I discover a sense of worship as a physical art, involving gesture, movement and colour. I still have a vivid memory of my first experience of a solemn Mass with procession at Easter, when I was, I suppose, about 12 – the awareness of a deliberate strategy of involving the senses at many levels.

The mild High Church atmosphere of those years was, for me, an environment that made strong imaginative and emotional sense, and indeed is still the kind of setting where I feel most instinctively at home, rather than in more simply word-oriented styles, or in the heated atmosphere of “charismatic” worship, repetitive song and unstructured prayer – although I’ve learned to be nourished by that, too, in many circumstances. But the ritual that is most significant for me apart from the routines of public worship and the daily recitation of the fixed words of morning and evening prayer owes more to non-Anglican sources.

Readers of Salinger’s Franny and Zooey will recall the somewhat unexpected appearance there of an account of the traditional Greek and Russian discipline of meditative repetition of the “Jesus Prayer” (“Lord Jesus Christ, Son of God, have mercy upon me, a sinner”). Practically every Eastern Orthodox writer on prayer will describe this, and many in the tradition also describe some of the physical disciplines that may be used to support it – being aware of your breathing, sitting in a certain way, focusing attention on your chest: “bringing the mind into the heart”, as the books characterise it.

The interest in uniting words with posture and breath is, of course, typical of non-Christian practices also; and over the years increasing exposure to and engagement with the Buddhist world in particular has made me aware of practices not unlike the “Jesus Prayer” and introduced me to disciplines that further enforce the stillness and physical focus that the prayer entails. Walking meditation, pacing very slowly and co-ordinating each step with an out-breath, is something I have found increasingly important as a preparation for a longer time of silence.

So: the regular ritual to begin the day when I’m in the house is a matter of an early rise and a brief walking meditation or sometimes a few slow prostrations, before squatting for 30 or 40 minutes (a low stool to support the thighs and reduce the weight on the lower legs) with the “Jesus Prayer”: repeating (usually silently) the words as I breathe out, leaving a moment between repetitions to notice the beating of the heart, which will slow down steadily over the period.

The prayer isn’t any kind of magical invo­cation or auto-suggestion – simply a vehicle to detach you slowly from distracted, wandering images and thoughts. These will happen, but you simply go on repeating the words and gently bringing attention back to them. If it is proceeding as it should, there is something like an indistinct picture or sensation of the inside of the body as a sort of hollow, a cave, in which breath comes and goes, with an underlying pulse. If you want to speak theologically about it, it’s a time when you are aware of your body as simply a place where life happens and where, therefore, God “happens”: a life lived in you.

So the day begins with a physically concrete and specific reminder that your own individual existence is breathed through by a life that isn’t your possession; and at moments of tension or anxiety during the day, deliberately breathing in and out a few times with the words of the prayer in mind connects you with this life that isn’t yours, immersing the anxiety and dispersing the tension – even if it doesn’t simply take away pain or doubt, solve problems or create some kind of spiritual bliss. The point is just to be connected again.

The mature practitioner (not me) will discover a steady clarity in the vision of self and world, and, in “advanced” states, an awareness of unbroken inner light, with the strong sense of an action going on within that is quite independent of your individual will – the prayer “praying itself”, not just human words but a connection between God transcendent and God present and within. Ritual anchors, ritual aligns, harmonises, relates. And what happens in the “Jesus Prayer” is just the way an individual can make real what is constantly going on in the larger-scale worship of the sacraments. The pity is that a lot of western Christianity these days finds all this increasingly alien. But I don’t think any one of us can begin to discover again what religion might mean unless we are prepared to expose ourselves to new ways of being in our bodies. But that’s a long story.

Posted by the Orthodox Christian Network and available on Google+.

Submitted to this site by Paul Crompton