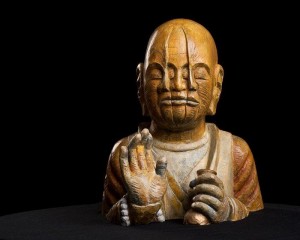 I will try to begin at the beginning. I come from generations of craftsmen, but my father – may he rest in peace – did not follow his inheritance in this respect. The native tradition of craft as a viable way of life seemed exhausted. Nevertheless, he retained a workshop. I remember as a child the deep seriousness with which he conducted me to it, as to a place of initiation. He continued to love what he had turned away from. His manner made a strong impression on me and I wondered whether manual work represented wholesomeness in a wicked world. Through my father something spoke to me.

At school, my hunger for a wider horizon coincided with the ambition of teachers for academic results; my half-hearted efforts at the bench not being praised, I disdained an essential direction within me. I knew no better, although, in truth, the atmosphere of the craft tradition which had reached me was threadbare, its representatives small-minded and self-regarding.

Where is the beginning? We are children of our parents, of heredity, but there is other matter in us, a different dimension: it is said that we are made in the Image of God. How should we live? After expulsion from the Garden of Eden, work was allotted to humanity as the meaning of life. In the book of Genesis it reads like a curse, but perhaps was a blessing. Thereby hangs our tale. It may not be incumbent on us to complete this work, but we are not free to desist from it.

After seven turbulent years in and out of University, in the extremity of personal crisis, something arose within me like a submerged continent and I turned helplessly towards it. I answered a newspaper advertisement and began, with crazy nerve and in contradiction to all my recent conditioning, to seek a living as ‘a craftsman’. Impressions that had slipped through the net of my official studies, came to my aid: the first time I had entered a woodworking shop I was amazed by the feeling of being at home. It was true, although I was a stranger there. How had it come about that this right feeling had no place in the life I was leading? Where had I been?

Who can tell the whole story? The force of attention awakened in me by ancient art, texts and places had been a secret learning, taking place despite me within the body of my official education. There is, indeed, a wider horizon, inside and outside.

I am recalling an undeveloped essence overwhelmed by a need it could not comprehend for a more abundant life, at odds with an education which promised this opening, but could not deliver its reality. The process I describe remains a mystery. The existence of more and less conscious influences belongs to it. That there were hidden friends, who felt the need to study attention, was the response to a prayer I had been unable to voice for the restoration of what had been lost: a living question.

I am invited to write about the inner meaning of craft: it has meant for me, firstly, this slow re-attunement, seeking its own paths irrespective of my blind ‘will’: a subjective remembering of myself. Outer and inner life seem divided, but are actually confused. At moments they have been disentangled.

The renewed experience of using manual tools brought immediate news that I had no physical coordination, that my hand, eye and mind had become strangers to each other. I sensed that this was not only an outer condition. I felt obscurely, but unmistakably, shamed. I had been magnetised during my studies by evidence of man’s perennial search for wholeness, but now the question arose in a practical form. A threshold had been crossed.

Encouraged to put myself persistently in front of what I could not do, the impression of being helpless deepened, evoking at moments a hidden capacity which had nothing to do with ambition. I was haunted by the quality of feeling that certain ideas touched in me. Was this evidence of the relationship between my scattered parts, the same call to attention which the practice of craft had begun to mean? At this time I heard of the ancient idea of man’s two natures, and marvelled.

In parallel researches into Christian thought, I came upon the statement: “Faith in search of understanding”. What has faith to do with a search? Somebody or something wishes to enter. Extraordinary experiences leave traces which seek to disturb the surface of life, revealing its poverty. Sensing myself, there is the resonance of another world within – perhaps containing – the familiar.

Linked by awareness with the sensation in my body, the movement of the tool tends to be more appropriate, effective and economical. Is this the point? In one way it is: but what of these two natures? Where is my real need? The hypnotic demand to impose ‘myself’, to ‘do’ a tout pris, is somehow enfolded in the need to ‘be’, but coarsely reverses the order: there is a cuckoo in my nest. Whatever the outer result of the search for sensation, the mechanical flow in me is interrupted and an active interest in what is taking place may appear. The literal meaning of ‘interest’ is ‘to be between’. Strange phenomena occur: working more actively, the right chisel, from among the hundred or so on the bench, comes to hand when needed; but all too often, where is it? The unknown leaves a trace, but “the Spirit bloweth where it listeth”. The Old English word craeft means something like strength.

I do not know what has been gathered during the process I am trying to describe, except that I am now proud of my capability to use tools. Has the question been driven out? Is losing it more dangerous than finding it? I ‘work’ to escape chronic tension, without seeing its seat; but sometimes I relax into myself, as if suddenly sitting up inside. Awakening to my sleep remains an extraordinary experience, as accessible and inaccessible to the skilled as to the unskilled. I am neither my tool, nor my functions. Everyone is a beginner, relatively. Perhaps skill is gained for the purpose of returning us to the beginning with new force. I look back on this time now and realise, gratefully, that it has not departed.

Far closer to the source, Eckhart’s words preserve the ancient idea of ‘craft’ as a Way: “Man ought not to work for any why, not for God nor for his glory nor for anything at all that is outside him, but only for that which is his being, his very life within him…work as though no one existed, no one lived, no one had ever come upon the earth.” And these lines of Rumi: “Night comes so people can sleep like fish in black water. Then day. Some people pick up their tools. Others become the making itself.” The inner meaning of craft must be this work.