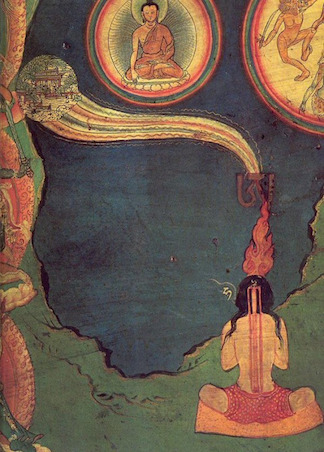 At the Wellcome Collection. London

This is an extraordinary exhibition, not to be missed. It recreates the story of the Lukhang Temple in Llasa, situated on a small lake within sight of the Potala Palace. On entering the exhibition a short, silent video shows Llasa today and Tibetan pilgrims performing prostrations and other rituals. It evokes a similar feeling of reverence in visitors as they move quietly through rooms displaying significant artefacts and statues, brought together from many different museums and private collections.

There are reproductions of scroll paintings clearly illustrating the subtle energy currents within the body that determine physical and mental well being and also filmed footage of demanding ceremonial dances. Finally there is a room reproducing on three walls intricate paintings from the 17th century which were used to guide Dalai Llamas on the path to spiritual enlightenment. They depict advanced practices of Tibetan yoga and ‘Great Perfection’ teachings, methods used in Tantric Buddhism to concentrate attention,energy and sensation towards a state of being beyond self identification and suffering.

These were never seen by the current Dalai Llama himself before he had to flee Tibet in 1959 but he has encouraged the full scale digital reproduction of these murals and photographs are included in a book: