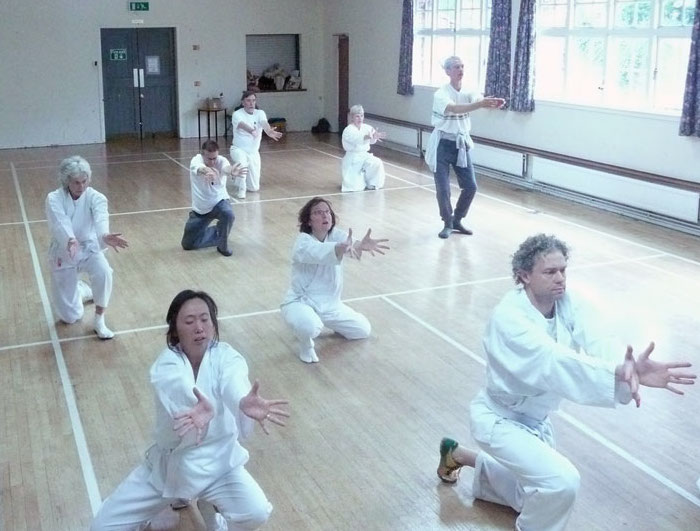 One day some ten years ago, someone invited me to accompany him to a class at the local university. The big draw was the teacher, a Japanese martial artist of whom I had been hearing for some time. The martial art he practiced was called Shintaido, a name that then meant nothing to me.

The class took place in the large hall of the local university sports village, and I took my place in a circle of people of different ages, mostly dressed in plain white clothing, who were running and wielding wooden staffs to a count in Japanese. This was the warm up and was followed by various drills with the staff and finally partner exercises. There was also running or moving while shouting, or kiai, an expression of ki through voice. It was invigorating but very alien.

Somehow, I returned alone over the following weeks and it became clear that Shintaido was a practice of depth: watching the teacher demonstrate the simplest movements I began to see that the simplicity and flow were the result of decades of study, something I had seen nowhere else.

Over the next few years I attended the class casually and sometimes intermittently until one day at the beginning of a new term I found myself telling, rather than suggesting to my husband that we go together! I do not know where the words came from nor why he actually agreed to come, but he did. He was also casual to start with but we began to practise together in class, and inspired by him, I overcame my fear and we both took exams and eventually progressed to assistant teacher level.

Meantime at a retreat, I enjoyed practising some of the open hands exercises outdoors in the early morning, before the day began. The person in charge happened to see this and asked me about the movements. I demonstrated a very simple one and in so doing, found myself expressing something which did not come just from me. I was asked if I could show these movements to others. This was a turning point for me, as I had never considered doing anything like that before.

I decided to ask my teacher how to go about this. He was very encouraging and the following year I felt able to attempt to start. Subsequently at a seminar of some 60 people, when we were invited to share a movement practice before we began the day, I offered to show some basic Shintaido. As this was well received, I took courage and started a local group that has operated for some two years, meeting every few weeks with a core of regular supporters as well as other more irregular attenders.

The aim is to bring a sequence of movements to people who would not necessarily be interested in or feel able to participate in a martial art but which in one way or another includes all the core practices of Shintaido. Based on the principles of oriental medicine and well-being in a broad sense, the movements are enjoyable in themselves. The principles of Buddhism and other traditions are embodied within them so there are layers of meaning to be explored. It is wonderful to see people far removed from the world of traditional martial arts able to practice and benefit from them. They can even be adapted to be done in a chair and this is one of the most exciting things for me. Also I have now been involved in the study group set up to research teaching these movements to people with special needs, including those who are older or unable to move freely.

The whole process has been extremely rewarding, particularly as various difficulties have had to be seen and worked with. The first time the class took place, I suddenly realised that only I knew what was to be shown, so everyone was looking at me and waiting for me to demonstrate. I had to act. This was a new and frightening situation. Over time I developed more confidence and familiarity, but often in the early days I would be shaking with nerves or wondering what had possessed me to start all this.

Even now I do not feel myself to be a teacher but a student amongst others and sometimes I wonder where teaching will come from. When it comes from me, it is not the same as when it comes through me. Then the quality is quite different. But when that doesn’t happen I have to get on with it anyhow, and accept however it turns out. At times when I felt tired or unwell, I learned to trust the forms of the movements as being in themselves energy giving and that if I opened myself, the energy that was needed would come.

There are many aspects to being with a group. One has to learn to observe and alter the activity depending on the state that people are in that day. In winter, when we are inside, space is limited so I have to manage that and make sure the activity is safe and productive. Then there is the need to develop a feeling of coherence in the group through implicitly regulating breathing or by counting aloud, adjusting tone, volume and use of voice as well as using and changing rhythms. It is fascinating to see how this can work effectively. Partner work is important too and it is touching to see a person feel more confident about working with another, and over time become more open in the way they move.

Sometimes my own form is not very good, or else when people are making errors I wonder what I have actually shown. This can be quite a shock, so I have to work harder on my own practice.

Personally, as a child I could move freely and gracefully, but later in life my connection to my physical self was lost and other faculties developed more, such as intuition, in the Jungian meaning of the word. Becoming aware of the sensation of the body became for me an inferior function, making me feel vulnerable when I had to show movements. Facing this vulnerability has been a revelation.

I also enjoy preparing the practice room before the session and the warm drink and refreshments I provide for everyone afterwards. These are potentially moments of quietness and an opportunity to be collected. The class itself is a call to gather something in myself, a call that I cannot maintain and constantly forget, but there are moments of a more meditative activity or watching that can remind me. Then just being with others practising together I am often given something unexpected. Silence and gratitude can come and can be shared. It is like a journey we have all embarked upon together and in which we need each other.

At first, I understood ‘new body way’ as literally a new teaching, so it is, but even this title has much more to it, as I am just beginning to discover.