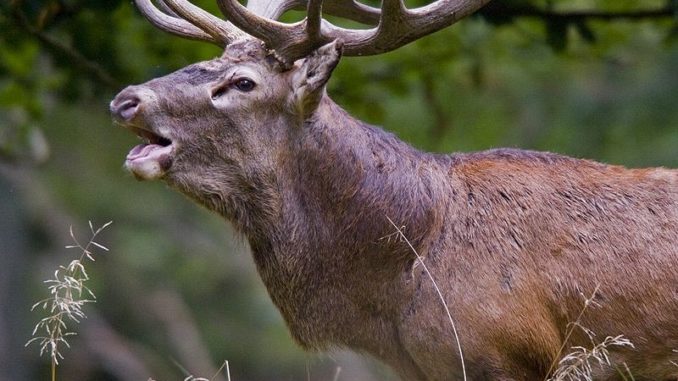 I ford the fast flowing river above Béal na Bó (Mouth of the Cow). Travelling north-by-north west, I pass through the white wood, with its trees of mountain ash, birch, and hazel. Further up-country the land is taken by rush meadow, which in its turn gives over to waves of heather, blueberries, and gorse. Here in a wilderness place of childhood I collected berries, and in later years cut peat for winter fuel; now I walk barefoot along pine trails treading careful as the wind swallows and gives birth to the echo of a curlew. Sensing a presence in a rivered gully before me I become still and in the bronzed evening, wait.

A warm southwesterly flows slowly through the mountain valley and within its colour a stag emerges from a gully of shadows and extending upwards, enters the rich glow of light. The native animal eases round its head to the watch of me, not ten meters between us. There momentarily inflamed between the declining sun and the rising moon one is dissolved into unity. In that unknown darkness of silence I am the stag turning slowly away, such a going a rite of passage. The tribe disperses; everything goes, lost to be found, and Jesus said, “Whom do you seek.” Aristotle maintains that it is not necessary for the initiated to learn anything, but to receive impressions and to be put in a certain frame of mind by becoming worthy candidates. However in a world that is increasingly bereft of prayer and of the partaking with the sacred, is it now a time of self-initiation?

When I was a child I wanted to know why there was death. Why was there loneliness and suffering? When my grandfather was dying, I was lifted up by an elder to lie beside him in his bed and thereupon asked him where he was going. He indicated that where he was going was so far away that it was only a breath away, and with a smile asked me to remember him in my prayers. In his My Back Pages Bob Dylan wrote,

“Ah, but I was so much older then

I’m younger than that now”

We as adults forget that as children we are sometimes as old as we are ever going to be. And what we term old age can be for those who have earned it, the realization of this agelessness, becoming, with childlike wonder, wise, forgiving, ready and so placed with an upward bearing, reconciled and alone.