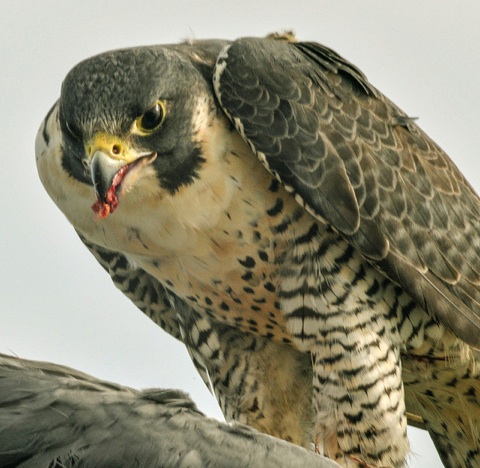 The peregrine falcon was perched on my left wrist, which was protected by a gauntlet. The bird’s eye-gaze was black; gleaming black. It bore a question – are you edible? Birds of prey kill and eat. However we may view the beautiful ‘natural world’, a bird of prey makes one aspect of it clear and simple. You die and I eat.

The fastest stoop (dive with wings folded to reduce air resistance) is said to be 200 miles per hour in the case of peregrine falcons which strike their prey on one of its wings. The reason why the bird’s lungs are not damaged during its stoop is that there are tubercles or rounded nodules on its nostrils which reduce the air pressure into its nostrils by guiding the air away.

I made three ventures into falconry: in Wales, Cumbria and the Forest of Dean. Up and down the country there are enthusiastic and dedicated people who train, breed and exhibit birds of prey. My own first encounter was at a small falconry centre in Wales run by a dedicated family. Several of us lined up, put on our gauntlets and were introduced to a number of birds: peregrines, barn owls, Harris hawks, buzzards, merlins and kites. One of the first things which struck me was how light and frail the birds are. If you look at the barn owl here, it appears bulky but there is nothing there except feathers! Its body is minute compared with its external appearance.

Taking a bird of prey on to your wrist the first time is a thrilling experience, and this thrill includes the hovering question, will it bite? No, it won’t bite. But it looks at you with a kind of intensity which you do not find in people! As mentioned above, its gaze has a special quality – am I being sized up? Yes, I am being sized up. There is a certain scientific passion in that sizing up, based on the mathematics of instinct. Quite impartial.

The first thing we learned was how to take the bird on to the wrist and make sure it stayed there… It stays if it knows it cannot fly off; and it cannot because you hold firmly on to a jess. This is a strip of strong material attached to the bird’s leg. Its usefulness was quickly learned when my bird panicked for some reason, launched itself from my wrist, flapped briefly and powerfully and settled once again on my glove. Such an event also shows how strong and tough the hawk’s legs and feet are.

A raptor’s feet need to be strong for gripping prey. Your hand and arm are protected by a glove, which can be as small as a motor cycling gauntlet and as big as the full length of your arm up to the shoulder. This is for settling very large birds such as pterodactyls!

On my first outing I had seen a demonstration of a Harris hawk flying on to the falconer’s wrist. So I knew what happens. The experience of doing it for the first time was something else completely. What a flow of thoughts and feelings flash through oneself at such a moment. Gripping a piece of meat in your gloved finger and thumb you wait. The hawk is released some distance away and homes in on you. It’s wings are spread wide, making very little motion as it glides in. It lands with very little impact, seizing its food, and you hold on to its jess. You know that the bird has done this before of course, but for me it was all new.

We have all probably seen birds with hoods on their heads. This is used to keep birds calm, and for example prevent them from seeing possible prey and causing a commotion wishing to make after it. Hoods are commonly used when a young bird is being trained to stay on the wrist.

One of the questions at the back of my mind was “does this creature have any feelings, attitudes to me, if so to what extent?” Putting it another way, is there a possibility of a relationship with such animals? One hawk I had with me never stopped “talking”, or squawking. It was “going on” about something. My instructor smiled and said something to the effect that this bird was loquacious. I looked at the bird, listened to it for a time and then spoke to it in a strong firm voice. “What are you going on about, hey, what’s it all about, hm, eh, you?” Both the bird and the instructor looked at me in silence. I couldn’t pursue the conversation any further just then but I felt it would be interesting to do so.

As with other traditional arts and crafts, falconry has supplied the language and culture with words. Some small streets and cul de sacs are called ‘mews’. These are frequently places where horses are stabled on the ground floor and there is living accommodation above. But an older association is with birds of prey. A mews was a cage where birds were put during their moulting season. Through Middle English and Old French the word derives eventually from the Latin word ‘mutare’: to change. 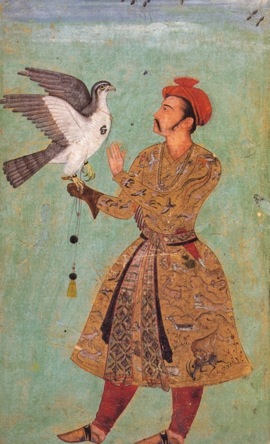 In legend, falcons do form relationships with people. When Ghengis Khan was out with his falcon one day, he was thirsty and dismounted to drink from a rivulet of water coming down a rock face. He had with him a silver drinking cup. As he raised it to drink, his hawk swooped and dashed it from his hands. This happened three times until the Khan drew his sword and killed the falcon in blind rage. In doing so he wedged his cup in the rocks, so decided to scale the rock face to the source. When he got to the top he saw a rotting snake in the water. The falcon had saved his life.

The experience of meeting falcons and learning how to deal with them is very rewarding. Far from the madding crowd… In fact it calls for a piece of poetry rather than prose to describe it, such as this poem by Hafiz…

My heart sits on the Arm of God
Like a tethered falcon
Suddenly unhooded.

I am now blessedly crazed
Because my Master’s Astounding Effulgence
Is in constant view.

My piercing eyes,
Which have searched every world
For Tenderness and Love,
Now lock on the Royal Target–
The Wild Holy One
Whose Beauty Illuminates Existence.

My soul endures a magnificent longing.

I am a tethered falcon
With great wings and sharp talons poised,
Every sinew taut, like a Sacred Bow,
Quivering at the edge of my Self
And Eternal Freedom,

Though still held in check By a miraculous
Divine Golden Cord.

Beloved, I am waiting for You to free me
Into Your Mind
And Infinite Being.
I am pleading in an absolute helplessness
To hear, finally, your Words of Grace:
Fly! Fly into Me!