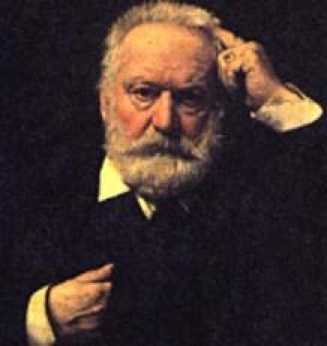 However artificial they may be, anniversaries have their uses. The bicentenary of the birth of Charles Dickens has probably encouraged a number of readers to re-examine a writer who (like Shakespeare) is accessible at many levels and as a major artist transcends any simple notions of “self-expression”. In a way that is hard for us to understand, Dickens occupied a special place in the culture of Victorian Britain, and perhaps as a result was the victim of a certain condescension on the part of eminent intellectuals of the time (like John Stewart Mill) whose education predisposed them to the view that popularity and profundity were incompatible.

Of all the writers of the nineteenth century in France, the one who most corresponds to this notion of the artist is Victor Hugo. The sheer scale of his achievement is daunting: his collected works comprise 15 volumes, each consisting of well over one thousand closely-printed pages – and this does not include his voluminous correspondence. He was a prolific poet, but also a novelist and dramatist. He was politically committed, and went into exile after the coup d’état that established the second empire, whose “Napoléon le Petit” as he dubbed him, was the butt of Hugo’s scornful satire.

He was also a committed and eloquent opponent of the death penalty (a short fictional piece of his on the subject, The Last Day of a Condemned Man, was greatly admired by Dostoyevsky, who often quoted it. At his death in 1885 some two million mourners joined the funeral procession. Like Dickens, however, his popularity brought disapproval from the literary establishment: when asked to name the greatest French poet, André Gide replied “Victor Hugo, hélas”.

This year marks the 150th anniversary of the publication of Les Misérables, the best-known of Hugo’s novels, and this could encourage English readers to re-examine the novel (familiar because of film and musical adaptations) especially as there is now a fluent and above all complete translation, which I can thoroughly recommend (Les Misérables, translated by Julie Rose, Vintage Books, 2008).

Previous versions have excised large sections, on the grounds that they were not essential to the plot. However, to reduce Les Misérables to its plot is to misunderstand it. From that point of view the first 50 pages (concerning the Bishop of Digne, who helps the central character Jean Valjean) is a digression, but in fact that opening is crucial, as are other so-called digressions, such as the long account of the Battle of Waterloo, or the descriptions of the Paris sewers. In fact Les Misérables is perhaps best approached as a metaphysical novel, which examines the nature of fate and the limitations of human freedom by focusing attention on the hidden forces that drive human action. That is why the centre of interest is the “hell at the heart of civilization”, and its victims – principally the “misérables” of the title. At 1200 pages it requires some stamina to read it, but no more than War and Peace and much less than A la recherche du temps perdu ‒ and it is never boring.

To link all this with Paris I would like to recommend a visit to Victor Hugo’s house which is in the splendid Place des Vosges in the Marais district. 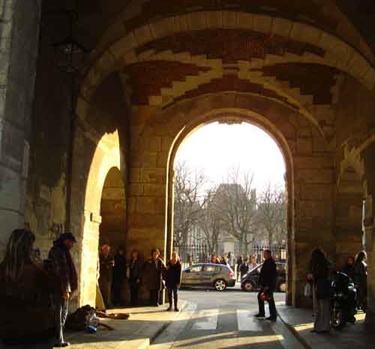 For those visiting Paris in the next few months there is the additional attraction of an exhibition of Hugo’s drawings, which constitute another, perhaps less well-known, aspect of his massive output. They are rarely exhibited, so it is an opportunity that should not be missed (it is on show until 19th August). The exhibition has the very expressive title “Les arcs-en-ciel du noir” (Black Rainbows – did the organisers realize that this expression was used by the poet Ted Hughes in one of his Crow poems?). Well over 150 of his estimated 4000 drawings are here, together with works by other illustrators, manuscripts and letters – even the pens with which he wrote Les Misérables.

The exhibition is tastefully presented, in very subdued light to protect the works, which are from all periods of his activity. There is an excellent brochure, with many quotations, and some English translations and there is also a catalogue with copious illustrations. What emerges above all from this exhibition is the poetic, almost dream-like intensity of Hugo’s vision. 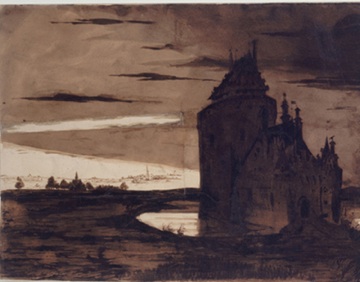 Ruins, castles, bleak landscapes and townscapes abound, all in sombre tones of black and grey. As he put it himself, “We have no choice but black” and elsewhere he posits a “terrifying black sun from which darkness shines”. For an informative link to the museum, together with some interesting background information, readers of French can consult the following site: