to what has been and what is

Early one morning – scene of silence and stillness-the sun strong enough to ease the sharpness of the air, casting shadows on the frozen spikes of grass. The branches of three pollarded willows, radiant with hoar frost, vibrating with life. 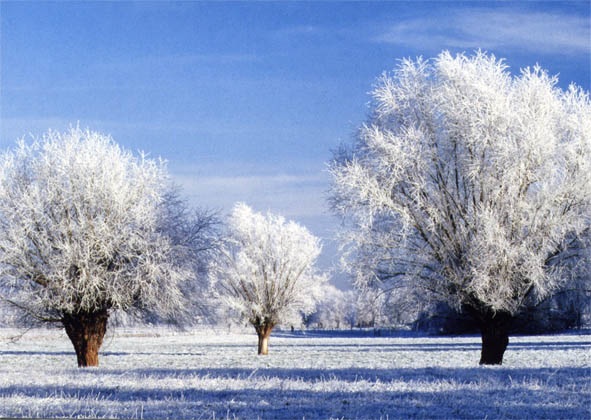 Mysteriously this photograph recalls an experience of decades ago. A reconnecton with a feeling of awareness, a sense of silence without and within, a certain knowledge of a higher presence.

Late afternoon of the ‘Twelfth Night’, in a dimpsy light, swaddled in layers of clothes, welly-booted, carrying torch and bag containing change of footwear, she trudged slowly through deep, deep snow along a winding, narrow country lane. On one side, skeleton hedges covered with snow, on the other side, huge snow caverns with curved, delicate, paper-thin roofs that she wanted to pinch with her cold fingers: awe inspiring shapes created by the gusting of fierce, relentless winds.

Now all was still. No living creature to be seen or heard. She, alone, yet not alone, standing quietly in her tracks, breathing in this unusual sight: a presence was felt in the silence: a feeling of being at one with all creation…a moment of sheer joy…. Darkness was descending, a few stars, pinheads in the canopy above…Torch flickering, she made her way eventually to the lane end and the main road… Not a car to be seen, pile upon pile of snow, no lights showing from nearby cottages-but two faint glows became visible along the road, gradually drawing nearer—a Green line coach emerged, faintly lit on its way to London, or was it Damascus?

The evening proved to be a meeting of crossroads…Which way? From then the real ‘journey’ was just beginning.